call the roller of big cigars 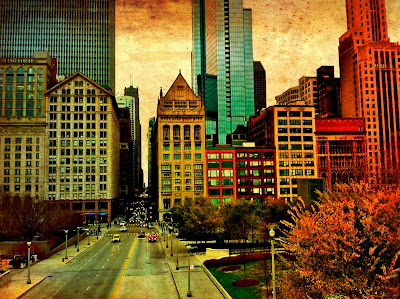 This is my last day in Chicago.

Tonight, I get to go home to California.

I am happy about that.

Last night was good. I went to the ALAN cocktail party. It was quite the gathering of partying author stars.

I went there with Janet Tashjian and Laurie Halse Anderson. I am awkward in noisy party situations, especially ones attended by stars, around whom congeal swirls of animated people who resemble asteroid belts of wine glasses.

It was, however, very very nice to hang out and talk with the following: David Gale (my editor from Simon and Schuster), Sara Zarr, Jackie Morse Kessler, James Dashner, Heather Brewer (we talked about tattoos), A.S. King, and David Levithan.

I have to admit something: I was embarrassingly swoonful when I met A.S. King. She knew who I was, and I think she is an amazing writer. She also likes corn.

I guarantee I will change that.

You will see, Amy.

I know this is a bad picture, but here are A.S. King and me at the ALAN cocktail party (where I saw a surprising amount of very red wine being spilled -- it looked like a Sam Peckinpah film -- and countless shatterings of crystal glasses. Come to think of it, I've seen teenagers party with fewer mishaps): 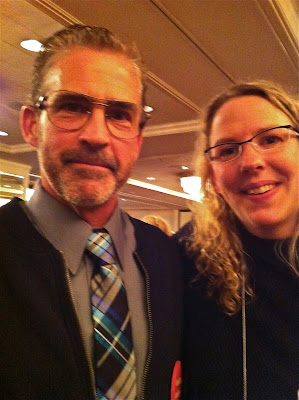 Afterwards, I did what people in Chicago do: I ate meat.

This afternoon, I am speaking at the ALAN Conference.

ALAN stands for Assembly on Literature for Adolescents.

Anyway, my talk is on Titles that Challenge and Are Challenged, and I will be speaking with Lauren Myracle, Cheryl Rainfield, and Paul Yee. The discussion will be moderated by David Gill.

After that, I will try my best to get to O'Hare on time to not miss my flight home.