it happened to the italians in ethiopia

Here is my philosophy about writing scary stuff: If it weren't more than just a little bit real, there would be no chance of it also being scary.

I am on my way to Miami.

Before I got onto the plane, my wife said, Do your agent and editor know how to get in contact with me, just in case something happens?

Whenever someone says SOMETHING HAPPENS in a question like that, it can only mean one thing. It means this: Just in case I receive the Nobel Prize for unraveling the secrets of the universe and must fly off to Sweden to receive my one-million dollars and glittery medal.

That's what it means, right?

I got some emails the other day.

This is what they looked like: (I smeared out the top and bottom messages because they happen to be from someone famous, and not, unfortunately, the Nobel Committee) 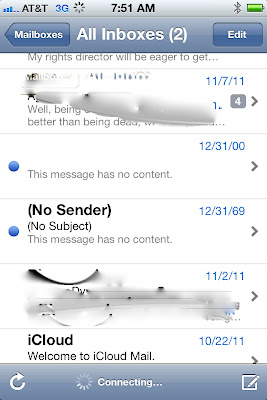 Obviously, they would have been Happy New Year messages, or some shit like that.

But I wonder if they were from the past, or from the future?

The 12/31/69 message is particularly fascinating.

There are people who were alive in 1969 who might be very angry with me about something that I recently wrote.