blind dates at a barn dance

Let me tell you how it went.

I am in Miami. I know that people may have strong feelings about Miami.

I love this place.

So yesterday, I was escorted from my hotel to the site of the Miami Book Fair, and taken to the theater where I would be speaking to a group of about 700 high school students.

I know that people may have strong feelings about talking to 700 teenagers.

I love doing that.

This is what the auditorium looked like just before we opened the doors: 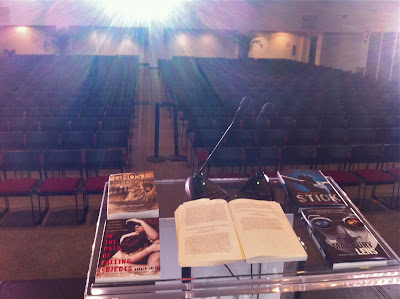 I do not stand behind lecterns when I speak. I like to move around. So I had a remote microphone on.

The books were there because, naturally, I talked about my books. But not in the usual way. I talked about them only in passing references to other things that have happened in my life.

Also, I read passages from Ghost Medicine and Stick.

When I read from Ghost Medicine, a few kids almost started to cry. Actually, I think they did. I explained something about a certain passage in the book that I have never told anyone.

The open book in the middle was only there as a source of inspiration -- a focus point for me. I will tell about it later.

When I speak, I do not like to read from papers or anything. I plan out my speech and I know what I am going to say ahead of time. That book was there to keep me focused on my real message, which was not about the novels I have written, it was about the things that those 700 kids in front of me had not written yet.

Here are a couple more pictures of what the place looked like after they opened the doors: 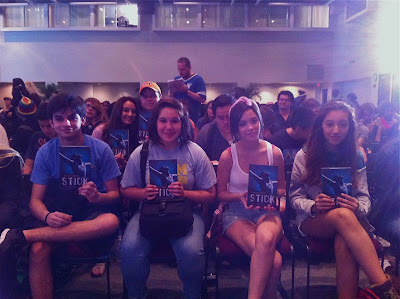 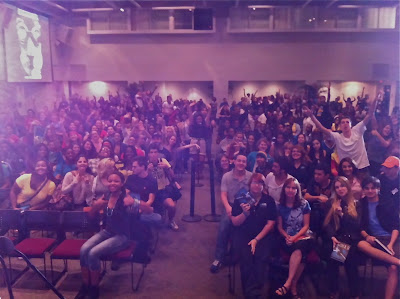 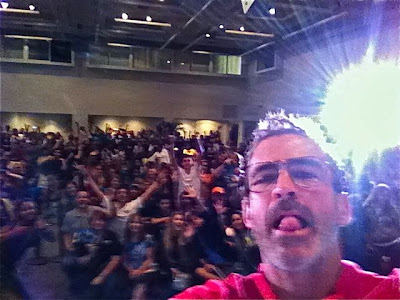 I stick my tongue out when I concentrate.

I was concentrating on how amazing these kids from Florida are.

I challenged them to reclaim their imagination. We talked about how the world is faced with more serious problems than we have ever had to deal with, and that none of these problems is going to be solved by bubbling inside a circle with a number 2 pencil.

The kids and teachers got it. They applauded for that.

I talked about how they used to spank us (boys) in school when we were bad, and how my principal had a metal hook for his hand and he would hold the paddle in his hook, and they used to make all the boys in the school watch him spank kids (boys) when he did it.

That is a true story.

I talked about my horses, and letters my brother sent home when he was fighting in Vietnam, and what it is like to live in coastal western Washington.

But none of that was what I really wanted to talk to them about.

So we talked about words and where they come from and how words create the universe.

I have lately been fascinated with this theory of Linguistic Determinism called the Sapir-Whorf Hypothesis.

Of course, none of the kids had ever heard about the Sapir-Whorf Hypothesis.

Basically, it presents the notion that your universe is only as large as the quantity of words you have in your head.

I made the kids say that. I made them say Sapir-Whorf Hypothesis.

I made them own those new words.


We played this game: The kids -- all 700 of them -- had to imagine emptying their heads of every word they ever knew. They had to shut their eyes and imagine not having a single word in their brains, and then open their eyes and think about what their universe would be like.

Owen Barfield wrote about this idea in Poetic Diction:

The entire... cosmos must be extinguished. All sounds would fuse into one meaningless roar, all sights into one chaotic panorama, amid which no objects -- not even color itself -- would be distinguishable.

Our universe, and the words we use to make sense of it -- to address the constant human desire to figure out what, exactly, is going on -- are not distinguishable from one another. Words do not represent (RE-present, as though showing something over again that is separate and distinct from the actual THING it RE-presents) the universe.

Words are the universe.

The kids really got it. They were pumped.

They are ready to go out and make their universes bigger.