all good books are about everything, abbreviated

I believe that good books are about everything that has ever happened.

This was a long and extremely tiring weekend, and now I am home for a little while.

Yesterday, I went from San Diego to La Verne, where I participated in Bridge to Books' event called The Why Chromosome. It was a panel discussion with six male authors who talked about boys and literacy.

It was very interesting, and we had a good crowd of enthusiastic readers, educators, and parents.

Bridge to Books plans on taking it on the road and doing this again in the future, too.

I have participated in countless author talks in the past few years. Usually, I am in the extreme minority (frequently the only male on the panel). I think everyone noticed a tremendous difference in the tone and substance of yesterday's talk. I don't mean to imply anything crude or sexist.

It was just different.

Ask anyone who was there, and they will tell you. It was a good thing.

I have met just about all these guys at various events in the past. It was really cool to see how funny, smart, and insightful the other authors were about their own childhoods and how they discovered their literate drives.

It was a really positive event. And there were actually guys (dads and boy readers) in attendance in the audience, which is also a rare occurrence at book events (especially ones on Sundays during football season).

Here is a photo of the authors who participated in the panel: 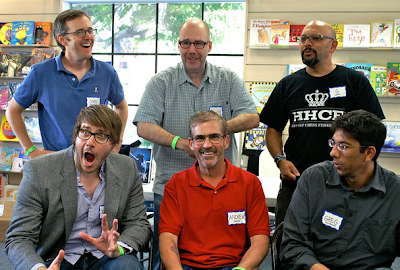 The back row, left to right, is John Stephens, Allen Zadoff, and Greg Neri. In the front are Johnathan Auxier, me, and Greg Van Eekhout.