lucky, a cigarette run, and the bison

Nobody reads blogs on Black Friday.

I can only hope you are sitting at home by the fire, looking out at the autumn trees and reading a book, as opposed to being conditioned to behave like good consumers by huge corporations with combined revenues that exceed the entire GDPs of more than half the countries on the planet called Earth.

When I was in Chicago, I had a very nice lunch with David Gale, my editor from Simon and Schuster. Among other things, we talked about my novel, Winger, which is coming out in the spring of 2013. David tells me there is a definite pub date for the novel. I hadn't even asked about that before, but when he returns to work in New York after this holiday weekend, I will find out and post it here.

I also know from my Macmillan people that the paperback version of The Marbury Lens will be coming out one month before the release of Passenger (the sequel), this coming fall, 2012.

Anyway, back to this lunch. David asked some questions about rugby. The principal characters in Winger happen to play rugby, which is a sport that involves much more than just what happens on the field of play. It's kind of hard to explain.

Anyway, Winger is definitely not a Sports book. It's just a book that tells a good story, and there happens to be sports involved. Although I believe that rugby fans and players will like the book, there is absolutely no need to pre-load your brain with any rugby information to enjoy the book.

It is illustrated, too. And there are comics and notes and index cards and scripts inside it, too.

David asked if I could send some photos of kids playing rugby for their artists, so they could get ideas about cover art. He even asked me if there were any elements I thought needed to be included in the cover art.

That was really nice.

Anyway, I have literally thousands of photographs I've taken over the years because I have coached high school rugby for many years (sadly, I don't do this now, as much as I love it... there just isn't enough time for me any longer).

So I thought I'd share some photos here, before sending them on to New York.

This is a lineout. Yes, you may recognize that the kids happened to be playing on the pitch at UCLA here. There is a funny story about a lineout in Winger. 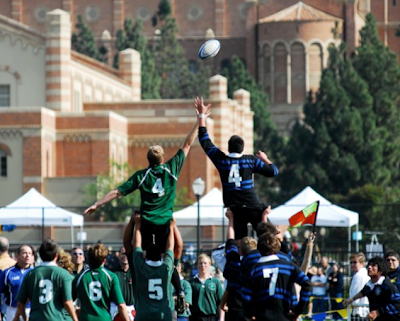 This is a scrum. You can see our hooker's foot getting the ball in the middle. 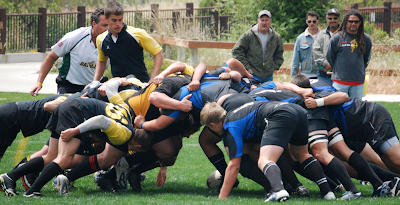 This is what the bottom of a scrum looks like. The team in green was from Perth, Australia.

This is a ruck. Yes, it does hurt. 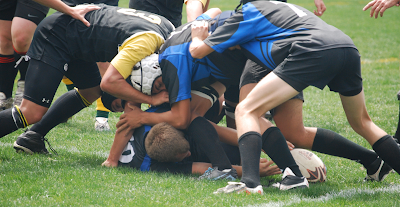 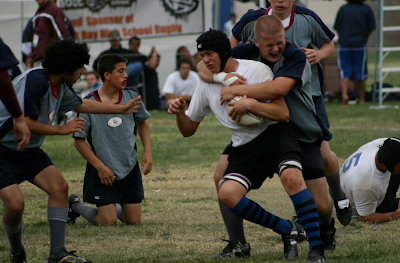 One last look at a lineout. 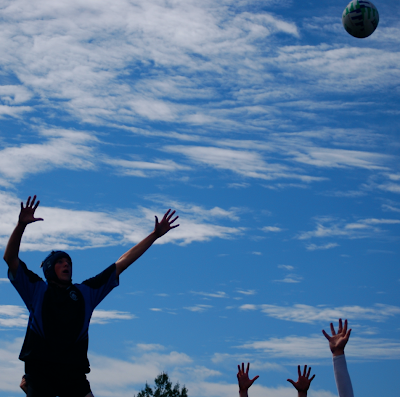