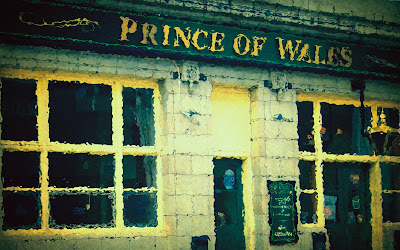 Well, in honor of this being Banned Books Week, this time I admit: Today, I did choose a chapter title from a book I wrote that has something to do with the blog.

I suppose the picture does, too, since it is an outside shot of a place where some pretty creepy stuff happens to Jack in The Marbury Lens, which is a book that has faced a few... um... challenges.

You might be happy to know that the good old Prince of Wales is also back for a ride in Passenger, too.

I have a few thoughts on Banned Books Week from the perspective of an author whose works have been the subject of challenges and from someone who has worked with kids on a daily basis for (ugh) several decades now.

First, challenges to books in schools and other public areas are partially a consequence of the drive to standardize our nation's youth -- to make them all think and solve problems in exactly the same, bubble-in, number-two pencil way.

Standardization is the putty with which those who hope to shape our nation's future wish to plug up all the damned leaks that allow free thought and creativity into the minds of our school kids.

Like banning books, it will prove to be a failed endeavor.

I was talking to a group of kids about reading just yesterday. I asked them to tell me what books they've been reading, who wrote them, and what they liked about them.

This was all in preparation for my BIG PROJECT which I am going to be doing for Teen Read Week, which is coming up on October 16. Maybe I will be able to share my BIG PROJECT when I speak at Mrs. Nelson's on October 30 with a panel of AMAZING guy writers (more on this to come).

Or maybe I'll only share it with the kids.

One boy held up a book he'd been reading. It was a Christopher Moore book. He borrowed the book from his friend, another boy, who was reading Neil Gaiman and Terry Pratchett's book Good Omens. He asked me, if he liked Christopher Moore, did I know of any books I thought he would also like?

I told him some.

One day, he'll be able to answer questions like that for his kids.

I am not making this shit up.

Kids - BOYS - do read for fun, as much as there is an overt movement to dissuade them from doing so, and a false belief that they are not good at it and do not enjoy it.

That is the worst kind of book banning there is - preventative banning with false subliminal messages.

You know what else? Teens today (Boys and Girls) read TONS more books for their own enjoyment than they did 20 years ago. I know this for a fact. I have seen it firsthand. And as they go out into the world and become literate, book-loving adults, I can only be confident that 20 years in the future there will be even more teen readers out there.

Unless the people who do not want kids to read win.

And they are on the same side as the people who do not want the kids to think outside their little bubbles.