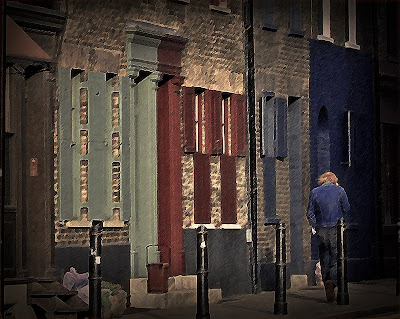 I guess it was last week that the topic of gay in YA became a bit volatile on a few notable blogs.

Don't worry, I am not chiming in.

I honestly don't know enough about the entire publishing industry, from agenting, to editing, and all the stuff that gets done to words between my desk and the shelves of a bookstore, to say whether or not there is significant evidence of unfair discrimination against works which include gay characters.

A few months back, I did extricate myself from any association with that publishing group behind the controversial YA anthology where one author was instructed to make a gay character straight. But I also know this: There are gay characters in a lot of the stuff that I write.

In fact, there are heroic gay characters in Stick, and, after that, in Passenger (2012, Feiwel and Friends) and Winger, too (2013, Simon and Schuster). Nobody has ever questioned the inclusion of gay characters in anything I have ever written.

Maybe if "gayness" is the only dimension to a character's depth, that would make it a bad character choice, poorly crafted, in the same way that "straightness" as the only attribute of a character would make that character shallow, uninteresting, and the story would probably be those two things as well.

So I kind of don't get it. It's a total non-issue for me.

That said, I have also had this conversation with a couple friends of mine in the writing business this week -- and the idea is this:

I hear a lot of beginning, aspiring writers complain about the lack of feedback when their work gets passed over by editors or agents. Editors and agents sometimes get targeted for being insensitive when their rejection responses lack specifics.

But editors and agents who do offer specifics can frequently make things worse for themselves. There is no good reason for an editor or an agent to ever give specific reasons for passing on a submission unless they intend to reconsider, or unless they like being sucked into black holes.