something always happens while someone else dances 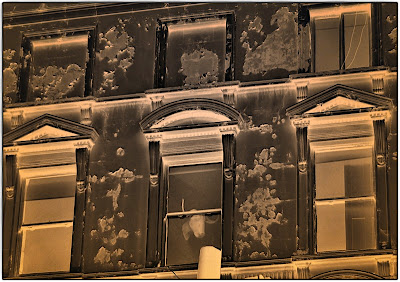 I have a couple things to say today.

First, I got an email last night from a dear friend regarding yesterday's blog post -- citing a connection between the title of the post and the photograph on the post.

My post titles, as I have said in the past, are 90% of the time completely unrelated to the content of the posts. When they are, it is obvious.

But, saying that, I also firmly believe that the reader's response to anything is what the actual intent of that thing in question truly is. So, my apologies for that inadvertent connection.

The photograph was a doorway at a 19th-century workhouse in East London, and I just happened to like the geometric shape of the letters on it. I took the photograph. I also took today's rather voyeuristic look at a cow head. Nothing more than that. But... eh...

As a matter of fact, most of the random titles I've been sticking on my posts (like today's) simply happen to be titles from the chapters of a book I just finished writing. I think they're cool titles. That's all they are. They relate to the chapters, but definitely not to anything else.

Second, Teen Read Week is coming up, October 16 - 22. I always do something cool for TRW. Last year, I gathered artwork from teens relating to the books they were reading and showed those images around the country at speaking engagements I had. This year, I am going to do something even cooler than that, if it is at all possible.

And, speaking of teens who read, yesterday I got the NICEST comment from a teacher on Facebook about a student of hers who was turned from a non-reader to an "X-treme Reader" because of his favorite book, The Marbury Lens.

I sent the kid and his teacher signed books today.

This is more important to me than just about anything.

As a matter of fact, I wrote the kid a letter inside the book I sent him, in which I talked about how much better off the world is because of teachers and librarians who connect kids like him (and me, when I was in High School) to the rest of the world.

As much as I love them, iPads and computers will never be able to do shit like that.

I could write a whole thank you list to the teachers and librarians I know across the country who do this for kids, and all the kids who have been born into literate lives because of them, but that list would be monstrously long and I'd be afraid of missing some names.

And that is the biggest ass-kicking that close-minded, anti-intellectual, condescending cookie-cutter ideologues like Meghan Cox Gurdon, that other author who parroted her crap on Huffington Post, and the failed prosecutorial broadcaster who interviewed me on MNPR could possibly get:

Here is the proof about real teens whose lives are changed because they connect to one initial book.

I am still waiting for the proof about one teen who harms himself or commits an act of cannibalism on someone because of a book he read.

The rules are these: I will shut up when you give it, and YOU have to shut up until you can.