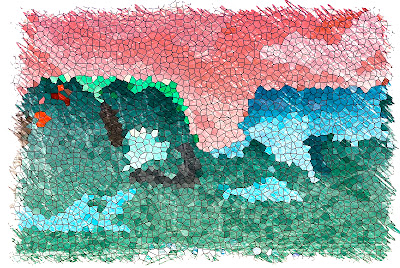 So, yesterday, when I came home there was a package from UPS on the steps to my front door.

The morning before, there was a bloody head there. The bloody head belonged to something furry. It was left by one of the cats, most likely.

There is still a bloodstain on the cement there. The bloodstain looks exactly like a profile portrait of Mary Todd Lincoln.

I do not know where the head has gone.

Maybe the UPS guy took it.

Anyway, inside the package was the first-ever, hot-off-the-press hardbound copy of Stick, which is coming out in exactly 23 days, on October 11.

Here is a picture of me holding the book as soon as I took it out of the package.

Yes, I was wearing a necktie yesterday. This is in my living room, by the way. It was very sunny here in California. 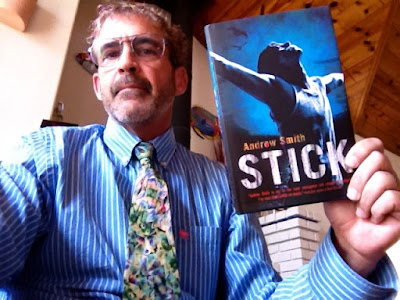 As a matter of fact, but also difficult to see,on my tie I have a gold star tack. The gold star was sent to me by my publisher, Jean Feiwel, when Stick received a starred review in Publisher's Weekly. Also, inside the package, was a very nice personal note from my editor, Liz Szabla.

Every time I mention Liz Szabla's name, there is a musical chime up above the clouds somewhere. Everyone in the entire writing industry knows this, and can hear that sound like a dog whistle. That's how good Liz Szabla is.

I do not have an acknowledgments page in this novel. But the work from the team speaks for itself.

First, there is Rich Deas' cover and title page design. So incredible. The title page is too cool for words: a couple matchstick kids on the beach.

You know who else was super-important? Kathleen Breitenfeld, who did the design for the text. You'll see why when you read the book, and if you read the Booklist review. It wasn't just the words, but how the words look and float around on the pages that was so important to this story. It must have been difficult for Kathleen to fight against the "you must be making a mistake" messages that computer programs want to give you when you screw around with words like I did (or take a baseball bat to them, as the Booklist review says).

Then, also, there was Anne Heausler, my copy editor, who checked every little detail that could possibly be checked, and also allowed me to get away with making up words like sawtoothed because, to me, it looks and sounds much better than saw-toothed.

Who ever says saw-toothed?

As for the rest of the team of friends behind Stick: Big thanks and appreciation to managing editor Dave Barrett (a man who rarely uses the shift key, but sent an all-caps statement of shock to me regarding the ending of the next Marbury book); Ksenia Winnicki, who, I think, does everything in the world and never runs out of cheerfulness and energy; Elizabeth Fithian, Holly West, Nicole Liebowitz Moulaison, Anna Roberto, Lizzy Mason, and Emily Waters -- Thank you all very much.

So, also yesterday, I got a message from a writer friend of mine, author Mina Javaherbin, and she congratulated me on the award nomination from ALA. Now this, I had no idea about. Neither did Liz Szabla (you would have heard the chime just now if you were in the publishing industry).

Apparently, Stick has been nominated for a 2012 Best Fiction for Young Adults Award from ALA/YALSA. Once again, it's such an honor to be on that list with so many famous names, and so many friends of mine, too.

Congratulations to all the BFYA nominees.

You can see the list of current 2012 BFYA nominated books here.