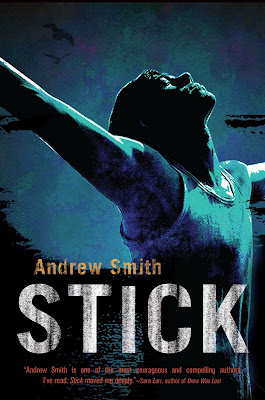 Just one month to go.

And every month on the eleventh, I have been posting pictures and random facts behind the book as a sort of a countdown to the release.

This month, I have a few things to say.

First off, a few favorites:

In the review of Stick on the blog called DogEar, the reviewer actually quoted one of my own favorite passages from the book:

Her dress was blue, and had orange and red parrots and bright green bamboo on it.

I wondered if parrots really lived in bamboo forests, or if maybe, the artist in charge of Mom’s dress just figured parrots plus bamboo equals fun.

... And in the Booklist review of  Stick, here is one of my favorite lines a reviewer has ever written about my work:


Sentences are nontraditionally arranged—some pages look as if Smith took a baseball bat to them...

Now, here's a last "eleventh" thought about my book... something that's been simmering in my head for a while. You'll have to bear with me, because my explanation may be a little convoluted:

Since the ARCs of Stick came out, I have received dozens of emails from teachers and librarians across the country who somehow managed to capture one of the elusive Advance Copies.

There are many recurring themes in the messages I've been getting, all quite gratifying and very flattering. But there's one thing that I've heard from teachers and librarians a number of times about this book, and it has made me want to say something to them (and everyone else, for that matter).

The thing is, I think kids like Stark and Bosten (and Emily and all the others, too) are in your classrooms and homes already. They're the kids we sometimes fail to notice.

Every kid has issues - thinks he's ugly, dumb, or not good enough; and every kid also lives in situations that he believes are completely normal - the way the world just is.

And every kid gets toxic, harmful, and, at times, amazing and wonderful words and messages stuck inside his head, too, just like Stark does - only Stark McClellan got a chance to swing a baseball bat at some pages in a book so we could take a look at them, too.

So, when you do read the book (and you will), if nothing else, my hope is that everyone sees the everyperson-ness in all these kids, and realizes they really are all around us.

I'll have more to say about Stick before the next 28 days pass.

And, once again, here is the book trailer video that was made entirely by kids: