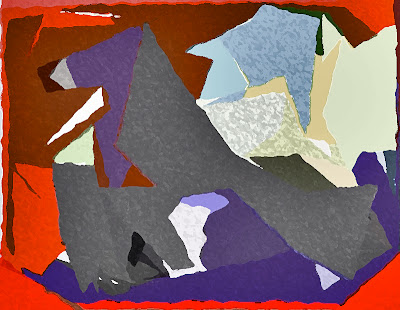 Eighty-one days isn't such a long time. That's the day Stick will be coming out.

One of the nice benefits of having a book like The Marbury Lens, that's received a decent amount of attention is that I'm finding now that I'm being contacted with a lot of readers all of a sudden who are seeking out and connecting with some of my earlier books.

This is a very nice thing, as a matter of fact.

I've received a number of emails this week alone about my second book, In the Path of Falling Objects, which is a kind of psycho road-trip set during the time of the Vietnam War, when there were plenty of Americans who had fairly good reasons to question everything that was happening around them.

An awful lot of that book is based on true experiences, too.

There were plenty of times during my life when I told myself, "One of these days, I'm going to write about this." (For example, I spent an awful lot of time alone in the former Yugoslavia. I was even there during the fighting of the civil war. One of these days...)

In any event, several (yikes) decades ago, I took a road trip with two great friends of mine. We drove down into Mexico. It was one of those trips where I kept telling myself, One of these days, I'm going to write about this

Some things about the trip I won't write about, but one of the stranger (and more publishable) realities was that for much of the trip I had to sit in the back seat of my friend Mike's car with a life-size tin statue of Don Quixote.

Mike didn't steal it or anything. He saw it down in Mexico, and for whatever reasons he just had to have that statue.

And, since I was the most compliant of the three of us, I was elected to sit in the backseat and keep Don company all the way through Mexico and back home. Don, as you may know, became a character in In the Path of Falling Objects, and yesterday I was asked about him.

Well. When Rich Deas was designing the cover for the book, he wanted to know what that statue may have looked like, in case it could be an element on the cover. I knew that even after all these years my friend Mike would still have Don. Don became quite a friend of ours. He was perfect company, and didn't drink to excess.

Anyway, I contacted Mike, who lives in Texas, and asked if he knew whatever happened to Don. Mike said that he still had Don with him, but that he creeped his wife out so much she made Mike keep him up in the attic. I asked if he'd be willing to send me some pictures for the art department at Macmillan, and Mike went up to the attic and snapped some for us.

Ah... memories of Don Quixote in the backseat.

Here's the real man of steel: 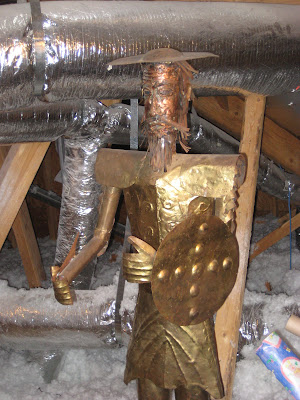