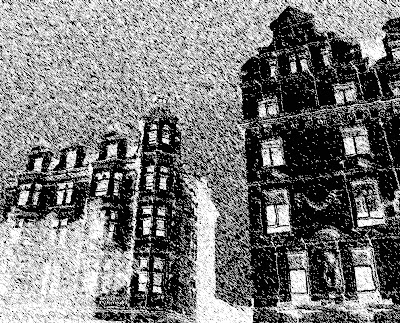 Okay. Well, I have a long story to tell.

After having three books published, you can come to expect certain predictable things.

This last one, it seems like the whole thing has been so unendurably long. The ARCs for The Marbury Lens came out about 8 months ago, I guess. And I'd decided at that time that I wasn't going to give them out to people I knew, in particular, to personal friends and relatives.

But, you know what happened? A few of my friends who did get a chance to read The Marbury Lens started treating me differently... like WAY differently. Or they stopped talking to me altogether.

Maybe the change was in me, too. I don't know. But things have definitely changed between me and some people now, and I don't like that.

Here's the other thing -- and I have a hard time trying to phrase this in a diplomatic way -- there's this particular librarian. The librarian in question is an old-school librarian, too. Trust me... since I published my first novel in 2008, I've met hundreds -- maybe thousands -- of librarians across the country and I do confidently believe that, as a group, they are probably the hippest, most open-minded people on the planet.

Back to OSL (Old-School Librarian):

I gave OSL an ARC of Ghost Medicine when it came out in 2008. OSL really liked it. I think it totally surprised OSL, and, I have to say I feel a particular fondness for that book. Honestly, stepping back and looking at it, I think I can say that it is pretty decent writing.

ME: What did you think?

Okay. Good enough. So... fast forward to March of 2010. The ARCs of The Marbury Lens are coming out. Of course, OSL wants one, but I had already decided... I told OSL that I'm really not going to give any ARCs to people who I know... that I had my own reasons for not doing it this go-round.

OSL kept mentioning the request to me.

And, I'm like, "But, OSL, I really don't think you're going to like the book. Really. This book makes In the Path of Falling Objects look like a Quilting Bee."

But OSL would have none of that. OSL's argument was that, as a librarian, OSL could handle reading anything.

OSL kept asking for the book.

When The Marbury Lens became available online for libraries to purchase, OSL procured some for OSL's library. And OSL kept asking me for an ARC, too. OSL explained that OSL would not be able to read the library copies because they would be checked out as soon as they came in, so would I PLEASE let OSL read an ARC.

This was a couple weeks ago.

And, after repeating my admonition: "If you were uncomfortable reading about Mitch in In the Path of Falling Objects, you are not going to make it through this book.

Loaned OSL an ARC -- my one and only ARC of The Marbury Lens.

A few days later, I ran into OSL.

OSL: So, I want to talk to you about The Marbury Lens.

OSL: I have a problem with it. In the beginning of the book, Conner is having casual sex with a girl at a party.

OSL: If I put that out, it's almost as though I'm endorsing casual sex.

ME: Have you read the whole thing yet?

ME: Well, when you do, I'd be happy to talk to you about the sexual content. Teenage boys do have casual sex, you know?

OSL: I know that. But I just wonder why you would include a scene where there is drinking and casual sex.

ME: Please. After you read the entire thing, I'll talk to you about it. I don't put things into books just to throw them out there. If I did, the content would be gratuitous, and I really do not like gratuitous content in any book. I feel strongly about that. The sexual issues in The Marbury Lens are important to the whole story. Read the whole thing, then we can talk about Conner, and Jack, and things like sexual pressure and growing up. Your putting a book on the shelves of your library is not an endorsement of anything. I'm certain you have books about genocide, slavery, and a whole lot of other horrible things in there.

So... I have not heard one more word from OSL.

OSL still has my one-and-only ARC, too.