and i am nothing of a builder 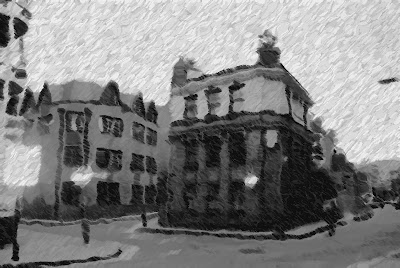 When I was a graduate student, one day I realized that I sounded exactly like my professors.

And when I was a kid, I tried my hardest not to sound exactly like my father.

I think the big get-groped-and-have-people-see-you-naked plane ride for most writers is probably a long trip (I dreamed about flying on an uncomfortable airplane last night) to finding some kind of voice.

Voice is one of the hardest things to talk about with the young writers I coach. It's like that Zen parable about fish: some of them have to explain to the others what water is. Not that I'm saying I know what kind of fish I am.

But people who've read all of my books... they frequently tell me things like, oh... these are all so different, but I can tell it's you who wrote them.

Yeah... and if they were fish, they'd be the ones trying to tell me what all this wet stuff is I keep bumping into.

So I thought it was about time -- for a number of reasons -- for me to just come clean and talk about a few things that need to be talked about because they've already begun rearing their ugly toothy heads.

Is it normal, I ask, for a grown man to have an unreasonable fear of lampreys?

It has to do with this book called The Marbury Lens.

Look, I knew coming into this trip that The Marbury Lens wasn’t going to be a book for everyone, and I certainly expected there to be more than a few outraged readers, too. And, yes, I have already gotten my share of mean-spirited email. Probably tweets, too, if I ever looked at my Twitter account.

Like Jack, the most-of-the-time narrator in The Marbury Lens, I frequently have internalized arguments (that even involve one side of my fish-brain calling the other side some fairly unpleasant names). The reasonable and mature, Mister Spock side of my brain tries to soothe the other, emotional, hand-wringing, distraught side by saying: Look, your stupid little novel was named to Publishers Weekly's Best Books of 2010 issue, it's a Booklist Editor's Choice for 2010, a BFYA nominee; it's gotten starred reviews in Booklist and PW... so you don't have to flail yourself, Arthur Dimmesdale, every time someone gets offended by something you've written.

Go figure. I am 1) like my main characters, and 2) prone to making allusions to works by Hawthorne. (The latter is due to my goddamned graduate professors, no doubt).

Oh yeah. I was talking about offending people... the things that are going to bother some readers about me and engender nastiness. That's what I'm going to talk about.

After you complete the security screening, buckle in. That's where we'll be flying to this week (but there may be an in-flight entertainment selection featuring a particularly offensive three-legged sheep and his yet-to-be-revealed sidekick).

Gah! Where did I leave that flail?