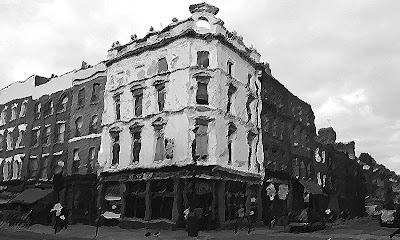 Okay. So where were we?

I don't trust aquariums. Fish always behave when you watch them through the glass, just like teenage boys. But I think my fish get out and fuck with my iTunes library and move stuff around in my house when nobody's looking.

In The Marbury Lens, best friends Jack and Conner have an exceedingly typical male-male relationship.

It's a typical relationship.

These kids would do anything for one another. Their love and trust is unquestionable. But the relationship between Jack and Conner also causes some readers to get very upset -- angry and offended -- about the way it's portrayed and the way the boys interact with one another.

They are teenage boys. Remember that.

Teenage boys, like fish in the aquarium, behave a lot differently when nobody's watching them. Recently, one irate reader jumped to a conclusion that Conner is somehow preoccupied -- obsessed -- with Jack's sexual orientation, and that he masks homophobic tendencies, albeit not too well.

Boys talk about that kind of stuff -- and test each other on it -- regularly.

It's what we do when we're kids.

There's nothing malicious, bullying, obsessive, or homophobic about it. In fact, it's just the opposite: it's how boys neutralize confusing situations that may otherwise force them to honestly confront feelings -- in this case friendship and sexuality (which is something teenage boys think about constantly). And boys tend to resist being honest and open about their feelings, especially when it comes to things like sex. So there's a lot of game-playing going on, testing one another as a means of diffusing the situation.

Here's a true story from my own life: When I was a teenager, I was backpacking through Europe and I met up with two other guy friends there -- also teenagers -- from the States. We got a place in a guest house together for a few nights, but it was three boys in one room with two beds.

They were big beds.

I don't even know why I felt like I had to say that (about the size of the beds, that is). But what do teenage boys do in that situation? They either have one of them sleep on the floor (I know... ridiculous, isn't it?) or they make jokes about sex, being gay, experimenting, whatever, out of the uncomfortable reality of having to figure out something as stupidly simple as who sleeps where.

But that's what we do. How we act. No big deal.

In fact it would be a big deal -- far worse and more stressful -- if we didn't say anything, or didn't make a joke out of it.

So, when Conner and Jack are (like happened to me more than once) confronted with the situation of having to share the one large (there, I said it again) bed in their hotel room in London, they both agree the situation is "super-gay."

This is how boys talk.

It's not hatespeak. It's not homophobic. It's boys being boys.

But one reader told me that the "super-gay" comment about their sleeping arrangement was a deal breaker as far as ever allowing a kid to read The Marbury Lens, which that particular responder was crossing off their "To Be Read" list just because of the "gay" comments Jack and Conner make to one another.

Two things about that: First of all, whether Jack is gay or not clearly would not matter in the least to his best friend. Conner just kind of wants to know. He wonders about Jack, and they're always competing, getting near all kinds of edges with one another.

It's what boys do.

Second, remember, I am a fish. I have been a teenage boy. This is how we talk to one another. You can politicize it, try to neutralize it, rant and rave about it, but it isn't going to change. Getting angry with me or crying foul at my book because of the very non-bigoted way the boys relate to one another is... well... it's the same thing that people do when they try to keep books like The Perks of Being a Wallflower or Crank or a thousand others I could name out of kids' hands.

It's just the way things are.

One person went so far as to suggest I include a kind of Public Service Announcement along the lines of "kids, don't do this at home..."

But it's the same kind of irate protests I got over kids chewing tobacco in Ghost Medicine and a fourteen-year-old kid (Simon) smoking pot in In the Path of Falling Objects.

Do you really think boys don't do that?

And what planet, exactly, do you live on?

Look, in The Marbury Lens Conner Kirk is an over-the-top kind of jerk, and his pressure on Jack is elemental to the story. But Conner is definitely not homophobic. Tactless? Definitely. Alpha Male personality? No doubt.

But he’s just a regular kid with regular kinds of flaws and misjudgments.

While few people will be confused as to the degree of love Jack and Conner have for one another – as best friends rightfully should have – the pressure to be cool and hip that some friends put on one another (and Conner lays it on pretty thick) can significantly contribute to self doubt, and, in Jack’s case, self-hatred. Conner doesn't mean to stress his friend out, though. It's just what happens to teenage boys when they have close relationships with other teenage boys.

The sexual themes – gay and straight – in The Marbury Lens are necessary. Boys test one another; they question their own masculinity and orientation through internal dialogue (like Jack does), and others, like Conner, project this inquisitiveness outward upon others – not in a malicious way, even though his best friend, Jack, does suffer the consequences of Conner’s poorly-executed gamesmanship.

It's part of a normal relationship between boys.

It's the way boys just happen to be.

I know this stuff.

And how we talk is another thing entirely.