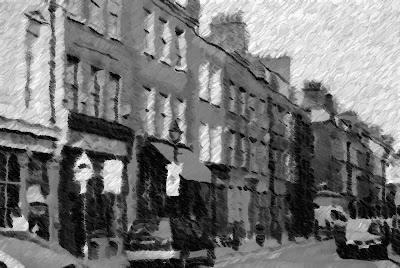 Okay. So, a couple days ago I warned about how this week I'd be confronting some literary demons.

If you haven't been following along, then here's the gist:

Basically, I knew a long time ago that The Marbury Lens wasn’t going to be a book for everyone, and I certainly expected there to be more than a few outraged readers, too. And, yes, I have already gotten my share of mean-spirited email, here within the first week or so of its publication.

So I'm going to be up-front right here and now about the things I'm afraid will bother people, make them angry, and inspire them to say nasty things about me and about The Marbury Lens.

In other words, I'm saying it ahead of time for them, so you can save yourself the time it takes to complain. Or... you can cut-and-paste this blog post into the body of your email. I don't really care... so let's have at it.

I'm starting off with this one -- the one that I thought would be least toxic -- but it's the one that has... well... surprised me. In fact, I hardly know where to begin.

Jack is a really complex character. He resents the fact that he has no relationship with his mother and father, and, as a result, is completely ambivalent toward his grandparents, who raise, care for, and definitely love him. People have complained about that. They tell me Jack should be nicer, more appreciative toward Wynn and Stella (his grandparents).

Oh... By the way, I don't get that complaint from guys who've read the book. And I don't mean for this to be misinterpreted, but Jack is a teenage boy. And he's hurt and angry about not having the kind of parental relationships that other teenage boys have. He's not mean to his grandparents; he just doesn't really allow himself to bond with them. There's a good reason for that, too: he doesn't want to be discarded by adults again. Boys do act like that sometimes. It's just how we are.

I've already mentioned one complaint I received about Conner's shallow relationships with girls -- how, in one scene, Jack walks in on Conner having sex at a party where kids are drinking. Well, there are a lot of important elements in that event, as well as in the other sexual themes in the book, but I'm saving "Sexual Content" for Issue Number Three... so I'll come back to that target (a whopper) for complaints later.

A big relationships-based complaint about The Marbury Lens that sparked a veritable conflagration on another blog (that I will not identify) last week has to do with Jack and Conner's relationship.

You know there are a lot of people who'll say that white male novelists have done some serious harm to others by writing stories from the perspectives of minorities -- Blacks and Native Americans, in particular. That is definitely a reasonable claim, especially in light of the titles we can name that fit into this category. So bear with me when I say the following...

Attention Shocked and Outraged Readers: You're going to have to suck it up and put up with certain things when I write about teenage boys and how they relate to one another -- ESPECIALLY if you have never been a teenage boy yourself. I don't care who you know, the gender of your children, or how much time you spent with your brothers or changing your nephew's diapers.

That just doesn't cut it. It's like looking at fish from the other side of the glass on an aquarium.

Remember: I am the fish.

That's just how it works.

Want to argue with me about it?

More on teen boys and how they relate with one another in the next installment.