we hide in bunkers from animals set loose 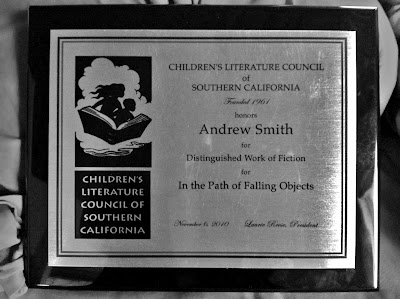 Tough part was I had to give a speech. Easy part was you have plenty to talk about when you seem to have a natural talent for throwing every planet in the goddamned universe out of alignment.

But I got to listen to Jacqueline Woodson speak and read. She is totally amazing.

You know what else I got to listen to? About a dozen people throughout the day saying how they were looking forward to seeing me speak at an event today in San Diego. But I kind of like shrugged it off, trying to be all diplomatic and stuff, like they had mistaken me for someone else -- like someone who had actually been invited to the party where it turns out I am scheduled to be speaking.

So I'm out the door again.

I just don't know what it is with me these days, but everything has been getting so incredibly, colossally, screwed up in my life. And it is totally (I almost said the F-word) messing with the work I'm doing, not to mention my head and my unwaveringly sunny disposition.

Probably not tomorrow morning. And you know why? Because I'll undoubtedly still be stuck in a fucking (there I said it) traffic jam on the Golden State Freeway coming back from San Diego.

Ahh... I can see it now: I'll nudge my son and say, "Hey, look! Big concrete boobs!" (you have to be from SoCal to know what I'm talking about)

But that's not going to happen.

Because I will be alone.

In a fucking traffic jam.

Next to giant concrete boobs.

You know how long Google Maps said it would take to get to the event from my house if there was traffic? [Side note: Hello!!! Google Maps... It's the Golden State Fucking Freeway. There is no IF.]

I could fly to New York City and have a beer finished in five hours and forty minutes. 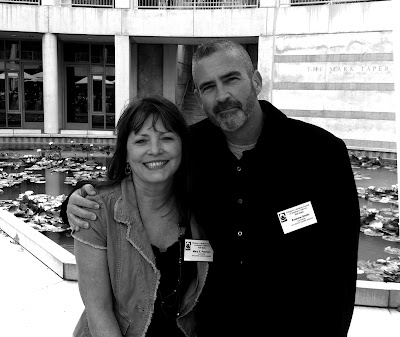 This is me (on the right) and Mary Pearson yesterday at the Skirball Cultural Center. Note the name badges. They add a nice touch. Mary is so cool, and she's such a tremendously talented writer. And guess what, Mary Pearson fans? There IS a Jenna Fox sequel coming out... 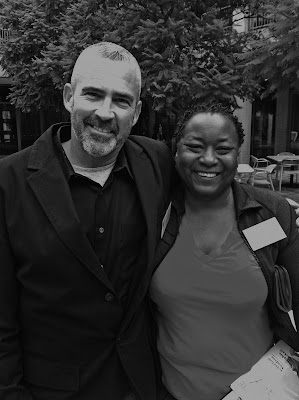 And this is me (the highly reflective one on the left) and Hope Anita Smith, who I am totally in love with. We love her books, and she is so talented and remarkable. And I'll be honest -- she read a poem yesterday that brought the entire room to tears.

Okay. Out the door now.

I have things to do, planetary orbits to dislodge, universes to disassemble -- and the day is hungry for me.