a discussion about experiments

This is what I have been doing since I arrived here in Long Beach:

I have finished working on the revisions for Passenger that my editor sent me a few weeks ago. That doesn't mean the editing work is finished, though, because I have been waiting for the rest of the book to come.

It was theoretically sent to my house in the mountains while I have been down here at the beach.

In case you were wondering, revising, editing, is not writing.

Revising compares to writing in the same way that running a vacuum cleaner across a throw rug on the floor of your living room compares to building the house the living room is in.

So I am still not writing.

But I am not working, either, and that is a dangerous place for me to be.

So when I get home, I am supposed to have a package of work sitting on my doorstep.

I have also been sending a lot of email to friends.

For some reason, just being away from my home makes me feel so disconnected and lost.

I thought I was going to hang around the SCIBA events yesterday afternoon, so I could see some real authors signing books, but I did not. I took a boat out onto the ocean instead.

There is something to be said for living in Southern California, where you can take a boat out onto the ocean at the end of October, wearing only a short-sleeved (Sex Wax) T-shirt. And Levi's.

It was a nice day with my daughter (who is sick) and my wife.

This is what Long Beach looks like from a mile out to sea on a perfect Saturday afternoon in October:

So, I went to the SCIBA Awards Dinner last night.

It was very nice. Brian Selznick, who wrote Wonderstruck and The Invention of Hugo Cabret was the main speaker. That was cool. I got a beautiful, signed copy of Wonderstruck, as well as about 40 other great books. I got to hang out with very cool indie booksellers, lots of other authors, and great supporters of literacy from everywhere.

And The Marbury Lens won the SCIBA Book Award, too.

This was something I was totally unprepared for, and boy did my speech ever show it.

Here is what I said:

I said I would like to thank Meghan Cox Gurdon.

It was a very big, quiet room.  I was afraid I was accidentally standing up in front of a NewsCorp convention or something.

I do not really remember after that. I know I said something about the importance of the support and patience of my family, and how terribly I missed my son, and I talked about my editor Liz Szabla (the sound of bells ringing... I was going to say "chimes," but that, apparently, is a confusing word), and then I think I said Happy Teen Read Week, or shit like that before losing consciousness on stage.

I was pretty much a complete idiot. Trust me. 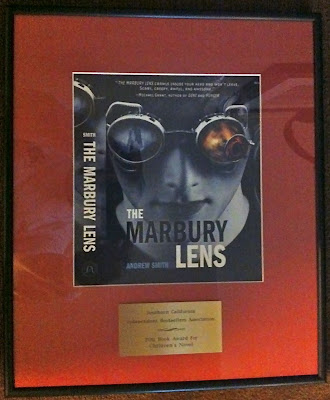