an awful lot of math

Yesterday, a Twitter friend in Idaho posted: Is @marburyjack right? Are we living inside a series of nesting universes?

She linked to a National Geographic article that reported findings from a recent study proving by mathematical equation that the universe is, in reality, just as Jack Whitmore (the narrator of The Marbury Lens) described it to be.

To the Nobel committee: I would be happy to come to Sweden and accept my one million dollars and sparkly medal, and I am available for lectures.

Like part of a cosmic Russian doll, our universe may be nested inside a black hole that is itself part of a larger universe.

In turn, all the black holes found so far in our universe—from the microscopic to the supermassive—may be doorways into alternate realities.

If you have read The Marbury Lens, you might find the study above to have some eery similarities to the architecture of Jack's universe in my novel.

At the opening to Chapter One, Jack says:

I am going to build something big for you.

It’s like one of those Russian dolls that you open up, and open up again. And each layer becomes something else.

On the outside is the universe, painted dark purple, decorated with planets and comets, stars. Then you open it, and you see the Earth, and when that comes apart, there’s Marbury, a place that’s kind of like here, except none of the horrible things in Marbury are invisible. They’re painted right there on the surface where you can plainly see them.

...And throughout the book, Jack keeps coming back to this image of things inside of things; universes inside of universes -- how he is actually at the very center of everything.

A few years ago, when I was writing The Marbury Lens, I initially started off with the intent of making the novel a kind of dark thriller about Jack's kidnapping, guilt, and an accidental murder.

But when I began writing the novel, I also started having coincidental dreams about this place inside of our world, which was inside yet other worlds.

The place I dreamed about was called Marbury (and, in my dreams, it looked a lot like the place in the book, too). I drew pictures of nesting dolls (I keep paper at my bedside) and I imagined myself -- as Jack does -- as being a kind of arrow that goes through multiple layers at the same time. I thought, what would that be like?

This is why Jack gets shot with an arrow the first time he pops in to Marbury, and why arrows and images of arrows keep coming up in the book. Die-hard fans of Marbury, get ready: The Arrow is the title of Part V (the final book) in Passenger, which is the sequel to The Marbury Lens.

(That's not giving away too much, is it?)

Well, at that time a few years back, I figured I had to include these concepts in the novel I was writing, so along came this creepy British guy -- Henry Hewitt -- and a pair of broken glasses -- The Marbury Lens.

So that's how Jack's universe is built. People have asked me to explain it hundreds, maybe thousands, of times. Universes that stack and enfold one another like Jack's grandmother's collection of Russian nesting dolls.

And Jack is an arrow, an antenna -- as we all are -- that happens to be able to "tune in" to other layers. Given the predictability of pattern that is evident in living and non-living things (lately I have been obsessed with biological, political/social, and inorganic iterations of the Fibonacci Sequence), then it stands to reason that there are going to be other "Jacks," and also worlds where those other "Jacks" have already died -- which happens to some of the characters in the initial novel, The Marbury Lens.

And if it were possible to "tune in" to one of those other universes -- as Jack, Conner, Ben, and Griffin obviously do -- it would be ridiculously egocentric to presume that life would stand still and not go on in our absence. This explains the pictures Nickie takes when she meets Jack on the Thames River cruise ship.

The real issue for Jack is this: If you could pop around, as he does, how would you ever be certain what was actually real?


In The Marbury Lens, Jack seems unwilling to admit that Marbury is actually real.


In Passenger, Jack has to confront the very disturbing possibility that not only is Marbury real, Marbury is everywhere.

And maybe he never "gets back" to any place he had ever been before, even if he believes, as he says, "This is real."

In Passenger, Jack, the arrow, gets to rip his way through his universes. He sees himself as standing between endless walls of mirrors that come from inside him, and he is shattering them all, watching everything fall apart.

So I took a picture of my iPhone between two flat mirrors, to show what Jack's universe looks like to him: 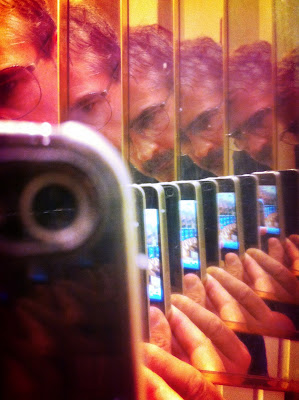 You can read the National Geographic article here.

And mind the gap.