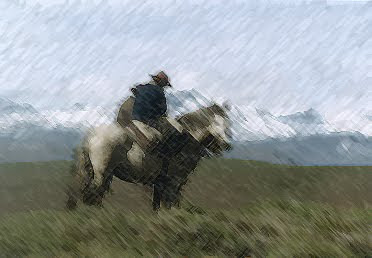 Yesterday, Mr. Smith's old horse Reno died. Reno was about 40 years old, so he lived a really long time up at Mr. Smith's house. They buried him, deep, with a backhoe, on top of a hill where he could look down at his old barn and the other two young horses, Arrow and Dusty.

Anyway, I thought I'd put this bit in here from Mr. Smith's book, Ghost Medicine, because I know Mr. Smith thought Reno was some kind of hero, which is why he wrote an entire book about this horse.

“Horses. They’re all different. Some are smart, some are stupid. Some are good, some are bad. Some of 'em you just can’t ever like. And some of 'em you like right away and you understand 'em, and there’s no telling why.”

Tommy yawned and stretched his long legs out against the rocks in front of us. “I like your Reno. He’s a good one.”

“You never said why Benavidez gave him to you.”

“Cause I don’t really know.”

And then Gabe smiled, but you could never tell with that smile of his what he was meaning because he was usually so serious or maybe scared. “I do.”

And I could tell he was waiting for me or Tommy to just beg him to talk, but we just stared straight into the fire, my eyes getting heavy and watery from the smoke and light. And we sat like that, silently, for the longest time before Tommy put his head all the way back on that old saddle in the ground, like he was about to go to sleep. Then I gave out and took my hat off and just rested my head straight back in the dirt.