my seventies self (part 2) 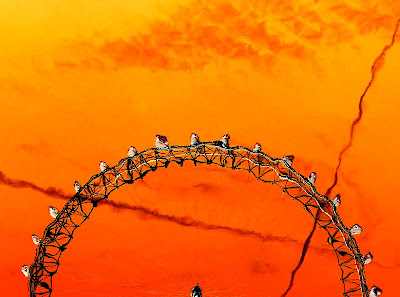 So I've been house-sitting for Mr. Smith, and I allowed this tribe of hippies to camp out behind the horse paddock as long as they agreed to feed Mr. Smith's disgusting horses for me.

In a moment of weakness, I allowed them to talk me into "getting in touch with my seventies self," which I only assumed would involve little more than playing one of their bongos in a circle with them in the afternoon to honor the equinox.

But I have no rhythm, and my fingers blister easily, and they had pity on me and let me stop when they saw how my eyes were welling with tears.

Anyway, I thought, this was an experiment -- an opportunity for me to experience something outside the constrained exile of my experience, as Mr. Smith often told me, so I went with it. Maybe it was something in the tea they made for me, but I was definitely not acting like the Nick Sweeney I always thought I was.

And that became totally clear to me when they talked me into going into Mr. Smith's sauna house with them for a Native American sweat lodge ritual. I have to say that I am definitely not on my "A Game" when I am sitting in a small room, completely naked and sweating, with three hippie guys.

Luckily, it was kind of dark in there. And what do you say to three naked guys when you're sitting there in a sauna, sweating, anyway?

"I never knew it could be this hot."

Then Twosie said, "Shut up, Dex," because I was the only one talking.

I wanted to leave, but I was the farthest from the door. I tried to make a mental note to myself: next time you take a sauna, Nick, sit closest to the door. Then I scratched that note out and wrote another: you will never take a sauna again, Nick.

Then we heard the buzzing. I figured out later that wasps like to build nests in sauna houses over the winter. I also found out, fairly quickly, that wasps get really mad when you elevate their core temperature to 120.

I also found out that, for all their "getting in touch with their Native American spirits," hippies are as afraid of wasps as I am. So we all ran out of the sauna, chased by hot, angry wasps, completely naked and sweaty, screaming like girls, flailing our arms wildly and running around in Mr. Smith's back yard.

Coincidentally, the neighboring Druids were just then coming out onto the hillrise behind the horse paddock, and when they saw what we were doing, I think they thought we were challenging them to some kind of pagan-equinox Battle of the Bands.

Get me out of here.