my seventies self (part 1) 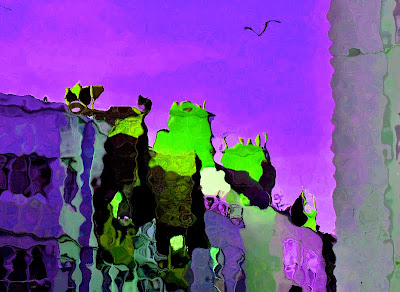 The guy who seems to be the president of the hippie group camped out behind the horse paddock is named Toozie, or Twosie, or Tuzey. I asked him how to spell his name, and he just laughed and stuck his thumb out at me and make some kind of royal-hippie-proclamation to the others in his clan, that went something like this:

"Ha ha ha... get a load of Poindexter. He wants to play Spelling Bee."

I have no idea what he meant by that, but the rest of the hippies started to laugh. I don't get it at all. Now they all call me "Dex" for no sober reason that I can tell.

As long as they do what I'm paying them to do and feed those horrible animals in the barn. And keep away from the house, too. And don't make noise at night. No, maybe they should. Maybe they could incite some major hippies-vs.-Druids battle.

Instead of Hollywood wasting their millions on remakes of The Karate Kid and Clash of the Titans, now THAT's a move (Hippies Conquer the Druids: The Final Battle for Earth) I'd pay to see.

So, I realized in house-sitting for Mr. Smith that there is just no place around where you can call up and have an all-white veggie frittata with soy cheese and gluten-free toast delivered (I know... you might as well live on an iceberg), so I decided to cook my own dinner. And I was, like, oh my God, there are all these brand-new cooking utensils in Mr. Smith's kitchen that have, like, never even been used. I kid you not, he even has an egg poacher. Still in the box.

How does he live?

But I didn't even get into the dinner prep when I looked out the kitchen window and saw the hippies going into Mr. Smith's greenhouse. They better not be planting anything in there, is all I can say. Mr. Smith would get really mad.

Then, just as the sun started to go down, they sat in a circle and began drumming.

That was wayyyy annoying.

So I went down there, all in a huff, and they just ignored me. And they were all practically naked, too. Barefoot, no shirts. Well, not the girls.

Twosie (I decided on a spelling after counting the remaining toes on his left foot... eeewwww!) told me it was for the spring equinox.

I told him they were making too much noise and I was about to have an anxiety attack, and only my mom is allowed to give me a half of one of her Xanax when that happens.

Then the drumming stopped, and Twosie said, "Dex, I think you need to get in touch with your seventies self."

And he took a string of rainbow-colored beads off and I was so repulsed when he put them around my neck, like he was marking me for some kind of hippie sacrifice ritual or something, because all the other hippies started murmuring stuff like "Lighten up, Dex," and "Stop acting like the Man, man," and "Dex is cool."

And shouldn't you, like, soak someone else's beads in Clorox or something before you just put them on? I mean, I was wearing a scarf and everything (and it looked fabulous), but, like, what if one of those beads actually touched my skin?

Anyway, more about my seventies self later.

I need to bathe.