whisper to a scream 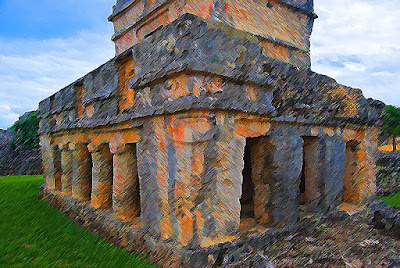 Let me tell you about the first time I went for a session with Jeff, the "Teen Whisperer."

Of course, our relationship has evolved -- it was two years ago, when I was fourteen, and my mom thought I was beginning to act strangely, like she would know anything about guys, anyway (I was an IVF baby -- Mom never had men around unless they were teaching her Kundalini Yoga or trimming the oleanders).

So, she dropped me off at Jeff's, and his place was, like, totally weird and messy. He brought me into this room that smelled like a gym sock and had a big plasma TV that was sitting, like, three feet in front of this black leather couch and there were all these wire-things coming out of the back of the screen. I found out later that this was Jeff's "Natural Setting" for teenage boys, and that all the wiry-things were called PS3, 360, and Wii, but I never used one before. I mean, sure, I knew what video games were and stuff, but I never played them in front of anyone before. It was too embarrassing... like the time I tried out for Little League and everyone saw that I didn't know how to throw a baseball.

Well, I mean, I could throw it. Only not straight, and about twenty feet, maybe, counting the roll. And I had bursitis for the rest of my life after that one humiliating day. Oh, and my mom even had to look up on the Internet "How to wear a cup," but then none of the other eight-year-olds at the tryouts were wearing cups. At least, if they were, they weren't on the outside of their pants like mine was.

So, yeah, I guess I had "issues," and Jeff was just the guy who was going to help me work through them.

So, anyway, I was in this room and Jeff just kind of stood back and watched me. After about an hour of doing nothing, he told me he wanted to see if I was the kind of kid who'd rather play COD or GTA. I thought that was like code for something creepy.

I said I preferred scrapbooking.

Jeff said that was fascinating.