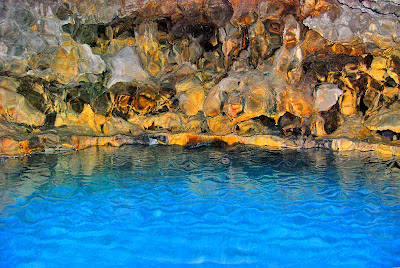 One of the things young people ask me about most frequently is where do I get the ideas for my stories.

Well, all of them have quite a bit of personal nonfiction in them, and I'm not going to say exactly where the line is between memory and imagination. But I have to say, again, that I really do believe in this Jungian concept of a collective unconscious. It has to be out there, and here's why.

Growing up, attending all the decades of school I'd subjected myself to, I was always told that dreams were just ways your brain had for processing through information it received during waking hours.

But, then, why do I dream about things that I have never seen or even imagined in my waking phase? Half of the story in The Marbury Lens was a dream, and not a very nice one, I may add.

And then I had this dream about a kid who was helping his father dispose of the body of a murdered man, and that became part of the story, too. Even the title of the book was part of a dream, and, believe me, if my brain had ever seen these things in my waking life, I'd be even more messed-up than I am.

So, two nights ago I had this dream about a house; and somebody had stolen three valuable paintings out of it. The paintings weren't taken just because of their value, they were stolen so they could be thrown into a swamp. It was raining in the dream, and the owner of the house was standing at the edge of the swamp where his paintings had been destroyed, complaining, "This is other men's weather."

So... if there isn't a "collective unconscious" hovering around out there, where do things like that come from? All I know is when the dreams like that start, I usually start writing another book. And let me tell you how much I do not want to write another book at the moment. So leave me alone.

Where the hell is Nick?
Posted by Andrew Smith at 3:06 AM