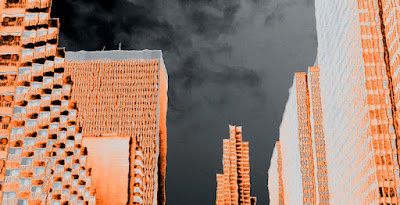 I am finally writing something.

Listening to what Mr. Smith had to say helped me a lot. I realized that there were plenty of times when I've felt stuck, confused; like I didn't know which way to go. So, he said, take one of those times and make it bigger.

He told me about something a friend of his said. Mr. Smith said there is a very talented author named Kerry Madden, and that she tells her students to take their main character and put him up in a tree, and then throw rocks at him. He told me that he didn't know whether that was Kerry's lesson or somebody else's, but he read about it one time in something she had written, and it rang true to him.

It's kind of a simpler version of what Steinbeck said, I think -- about people caught up in their human lives and how evil constantly respawns. Anyway, it made sense to me.

So, we talked for a while about what Mr. Smith said was a universal story about teenage confusion. And he told me to consider different Points of View, too. (He meant as a writing technique -- first or third person).

Then he gave me a writing game, too: Mr. Smith said for me to think about an object in my room, something small that could be carried around. He said it could be anything, even an article of clothing, but that it had to have some connection to me.

Then he told me to put that object somewhere: in a library, in the middle of a field, in the frozen food case at a supermarket; and tell a story about how it got there, how it connects to a character, maybe how the character is led to it.

Mr. Smith said this wasn't an idea for a story, but it could be if I wanted it. It was just an exercise for building what he called "connective tissue" between people, things, and events which is the stuff story writing is made of. Mr. Smith said exercises like that are for young writers what going to the gym is for athletes. Sometimes it can be a drag and not very exciting, but you don't consciously realize you're gaining benefit from the trip.

Mr. Smith said he's got hundreds of exercises like that.

Then I really started to understand what he meant the other week when he told me that being a writer is kind of like being in Boot Camp.

Anyway, after talking to him and thinking about all the stuff he told me, I knew I was ready to write what I'd been thinking about -- and it didn't have anything to do with all the specific stuff we talked about.