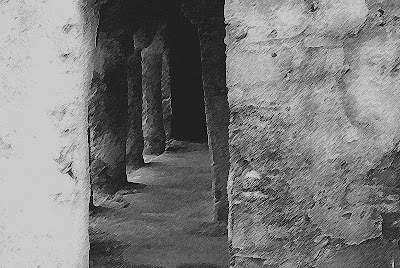 Here are a couple of things that have come up over the past few days.

I was at a dinner on Saturday, and one of the guests at my table whispered to me, "Is Nick real?"

So, I have a confession to make: yes. Nick is really real. And so is Drew. I hardly ever actually write anything on this blog. Mostly, it's Drew, but in the last month or so, Nick has been making a good case for my simply handing the whole gig over to him.

Which is one of the reasons why Drew has been angry and occasionally hijacks and deletes a posting by slipping in his sock puppet theatre.

Going out with writers and book people always seems to bring interesting topics around, and this one came up over the weekend, too: it was about how I write, and how I manage to produce things (like full-length novels) so quickly.

It usually takes me about 2 months to write a novel. And when I'm finished, I am finished.

I know, I know... this really pisses off a lot of writers. Not that I think I have a better way of doing things... and definitely not to suggest I am "better" than anyone... but despite my admiration for Hemingway (and this is a quote from HIM, so it doesn't count as ME cussing), maybe his first drafts were "shit," but I have never done a second draft in my life.

It's because of the way I write (and I've said before how Hemingway never had the benefit of word processing software -- even though if I had to write out longhand, I think I would still only do one complete start-to-end draft). I edit and re-edit as I go, so when I get to that last page, I truly am at the ending of the book.

This is the only way I know how to write.

Most authors I know sell their ideas ahead of time -- without actually writing out a book. Maybe they produce a detailed synopsis, or maybe they just have an involved conversation with their editor... I don't know.

But I don't do that, either. I write a book. I usually think I'm doing something insane, but I write the whole thing, anyway. Only then, after I finish it, do I tell anyone about it.

I don't know if I could ever do the sell-an-idea-and-then-write-the-book method. I envy people who can. It must be nice, but I am absolutely convinced I'd run that ship right into the biggest iceberg in my ocean.

My way of writing is difficult. It must be why I drive myself to the edge every time I'm working on something. It's why I need responsible lackeys like Drew and Nick around to cover my tracks once in a while.
Posted by Andrew Smith at 3:07 AM