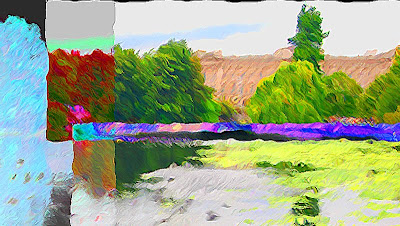 I had to pay attention to nearly the entire Countdown with Keith Olbermann last night until I saw some books in the background.

He had them stacked, horizontally, at the end of his bookshelf, something that men sometimes do when they don't want to use bookends; or when they want the television audience to clearly see the titles.

Two books there: Religion Gone Bad, by Mel White; and (what a surprise!) New Rules by Bill Maher.

Hey Keith! Hey Keith! Come and interview me! I can talk about anything, and I have lots of really good books I can put in the background behind me! And mine are thicker than Bill Maher's!

I embrace my ADD.

Mail. I got an actual fan mail paper letter a while back. It was from someone who'd listened to the audio version of Ghost Medicine, which I could also put on a shelf behind me. Did Maher have an audiobook there? I think not.

Anyway, the letter was particularly adorable (I know. I hate that word, too), because the lady who wrote it simply addressed it to: "Andrew Smith, author" and mailed it to Random House (who does my audio books), who, fortunately, sent it to me at my home address.

[Let me tell you... I have a whole 'nuther blog post, one of these days, about all the people who've been really nice to me because they thought I was a different ANDREW SMITH, and, when they found out I wasn't the ANDREW SMITH of their fond childhood memories, dumped me like a Don Knotts lookalike on a blind date.]

But I digress. I bring up the mail reference because yesterday, my friend Yvonne, who's reading an ARC of in the path of falling objects, tells me:

Man, are you gonna get mail, strap in, it could get ugly.

I'm thinking, hopefully not as ugly as the "Wall o' Fake Books" behind Howard Dean on Olbermann last week.

But, wait. I much prefer the "adorable" kind of mail. Or, I'm thinking, does "ugly" mean I am going to be inundated, whelmed, as it were, by parcels and packages containing rare and exotic fruits; caravans of supplicating postal carriers laden with gifts of spices and ivory?

Or, I asked, might it have something to do with the fact that I wrote a book that is set during the Vietnam era; about romantic-minded boys who follow a delusional maniac out into a desert, looking for something that was never there in the first place, risking their lives -- and everything they have -- for it... like The Wizard of Oz on crack, or, better yet, The Wizard of Oz on heroin withdrawal... are you saying that might scare up bad memories of the last eight years?

Well, in that case, I might be one of those other Andrew Smiths.