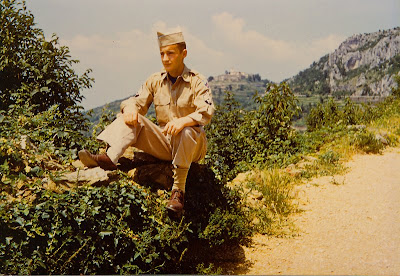 Let me be clear about this right now: I am an orphan. And it's hard for me to express how envious I am of my guy friends who can still hang with their dads.

Strangely enough, my dad and my wife's dad both died unexpectedly the same year. We were both very young, and, although we lived near one another, didn't know each other at the time. So there were lots of things I couldn't do with, or ask my dad. I never got to sit down and drink a beer with him. He never got to see me get married, or hold my children when they were babies.

When I was a teenager, when I was in college, I swore I would never have children. But when I got to that right point in my life, there was nothing more in the world I wanted more than to be a dad myself. Maybe I was just trying to make up for something I'd missed out on. I don't know.

When my wife got pregnant, I convinced myself that something terrible was going to happen to us... especially when we found out we were expecting a boy. Because I swore to any God who'd listen that I'd give my son everything I missed out on getting from my dad.

When my wife was about five months along, we moved into our first condo. The night we moved in, we ate take-out food on the floor and slept in sleeping bags in the living room because none of our stuff had been moved yet. We did move one thing: a plaster bust of Elvis Presley that I'd bought years before in Mexico. The Elvis Head was special to me. Don't ask me why.

Well, that night we both woke up in the middle of the Northridge Earthquake of 1994. Our condo was just about smack on top of the epicenter. We didn't have anything to break... except for my Elvis Head. It fell off a shelf and shattered on the floor right next to our own heads. But my wife, and unborn son, were okay. Elvis had left the building, though.

A few months later, when my wife went into labor, we packed up my truck and headed off for the hospital. We were going to have the baby about 50 miles away, because that particular hospital allowed me to be present in the delivery room and actually handle the baby as soon as he came out. They even gave me my own bed in her room so that the baby would NEVER be out of my immediate control. Yeah... hospitals don't do that kind of shit anymore.

The ride there, needless to say, was pretty tough on my wife. The roads were still busted up and bumpy from the quake, and she was puking into a mixing bowl the whole way. When we got there, I walked into the emergency room and told them my wife was having a baby, and they were, like, lah-de-dah... sure, bud... you need to calm down, man. But when I finally carried her in and they looked at her, she was already at 10 cm. and the baby came out in about 30 minutes.

Oh yeah... no drugs, no C-section. My wife wouldn't have that.

I've heard it's called a "King's Dream" when you have a son first, and a daughter second. My daughter was born almost three years later. Coming from a family of only boys (four of us), having a little girl around was quite a trip.

Now my daughter, Chiara, is 12, and Trevin is about to turn 15 in five days. I know I haven't answered all their questions yet, and I haven't done everything with them that a dad is supposed to do, but we have time.

The picture at the top of the blog is a picture of my dad. I think he was about 19 years old then, a soldier in Italy, where he met my mother.
Posted by Andrew Smith at 5:27 AM