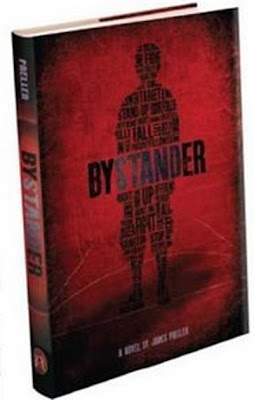 But before I talk about (another non-review) this book, I thought I'd start doing this on as regular a basis as I can: talking about and showing off great new books for boys. I don't think anyone else does this. At least, again, the only YA booksites I find seem to be 95%, if not exclusively, oriented towards girl fiction.

But I'd like to hope that people are beginning to catch on. So, hopefully, once per week or so, I'll be able to talk about a newly-released, or soon-to-be-released YA title for boys. I'll be scouring the stands (be warned) at ALA next month in Chicago, looking for just such books.

By the way, too, I'm going to make a distinction in age-levels, because I really think that the YA stuff that I write for boys is probably a little too -- shall we say -- edgy for boys under 13. Or, at least I'd say parents should be advised, and maybe read first.

Well, they should, anyway. After all, the best way to get your boy to want to read something is if he sees you reading it, too. DAD. So, go ahead and buy 2 copies.

In fact, if you're a middle-school teacher, I think you should buy an entire class set of James Preller's Bystander, a tense, suspenseful, fast-paced study of bullies, their victims, and the consequences involved with being a "bystander."

Ultimately, bullying connects all of these players, whether they see themselves as intentional participants or not. Preller's novel tells the story of Eric Hayes, a new 7th-grader who's pretty sharp when it comes to figuring other kids out and keeping himself out of the line of fire. When push comes to shove, though, Eric has to make some pretty tough choices and confront the monster that everyone else in his school fears.

Every boy who's gone through junior high and high school has found himself in these same situations that Preller sets down so clearly in Bystander. The real value for boys here, I think, is the no-nonsense realism of the plot: There are no tidy and clear-cut answers; and just being "good" isn't always good enough.

Boys are going to love the fast-paced arc of this story. The first 20 pages build so much understated tension that it's impossible to stop reading. Most importantly, Bystander is a powerful and valuable resource for any school looking for additional perspectives on educating kids about bullying.

Recommended for ages 10 and above.
Posted by Andrew Smith at 6:03 AM