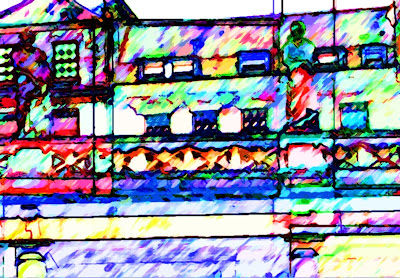 I found out that if you put enough Sriracha Sauce in a taco, it is possible to successfully replace the meat, entirely, with a fistful of Tylenol PMs.

So, I finally got Drew off to dreamland (make that DreamLand Lite, which is the version that includes breathing... I checked a few minutes ago), and I will be taking over the blog today.

He told me I could, anyway. But he's been kind of tense and [makes airquotes, which really should be an HTML tag] forgetful [stops making airquotes] lately.

Anyway, I thought I would riff on this "Boys and Reading" thing he's been writing about, since, as a high school student with the XY option, I have some relevant experience in the matter.

Here's the problem with most schools, as I see it. On the one hand, school administrators try to push their programs as being "rigorous," but doesn't Rigor mean, by definition, that some kids won't make it? After all, not every salmon gets to make it up the stream to spawn.

Kind of sad for the salmon, isn't it? I mean, they spend all their lives going through puberty, then finally get the big chance to, like, totally orgy it out so they can die with satisfied expressions on their gillslits, and a lot of them end up as bear sushi on the commute. But if every salmon got to spawn, there would probably be some genetically inferior examples of fish out there... you know, the ones with enormously big foreheads and really close-set eyes, kind of like some of the kids in my English class, who could actually serve as effective poster children for the This-is-why-you-shouldn't-drink-vodka-while-breastfeeding-your-fucking-baby campaign. If there is one.

Okay, so there's the "rigor" myth. At the same time as there's this No Child Left Behind commitment. Which means that schools have to lower the bar for the general fish population to the extent that every salmon will get to spawn.

There used to be some fairly formidable obstacles in our stream: Hawthorne, Dickens, Melville, Hemingway, Faulkner. But now schools won't teach those works because not enough fish will make it to the big show. But the fish that would have gotten through that stuff (and enjoyed the challenge) end up getting lost and discouraged.

Remember... boys, whether they've got fins or feet, LIKE challenges and competition. We like it when some of us don't make it. It's part of being a boy.

So, instead of dying with the contented fishy face, we're dying with the morning-after Oh-my-god-what-was-I-thinking-last-night-please-tell-me-my-children-are-not-going-to-look-like-THAT? expression of horror.
Posted by Andrew Smith at 6:28 AM