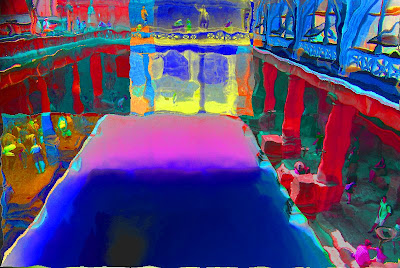 Recently, I asked novelist Yvonne Prinz what she thought about this current double-edged sword: losing boys as readers, and the depletion of books targeting them as an audience. Yvonne's fourth book, The Vinyl Princess, will be out in February, 2010 from Harper Collins; and she also maintains a blog called The Vinyl Princess. Here's Yvonne's take on Boys and Reading:
Recently in Toronto I was signing autographs for the usual suspects: smart girls holding a copy of my book, most of them sporting cool indie t-shirts, edgy haircuts (I never get the cheerleaders), and wearing cool footwear. I looked up at one point, however, and caught sight of an interloper moving up in the line--a BOY? I couldn’t wait to meet him. When he got to the front of the line I treated him like a celebrity. I was full of questions. This kid was no nerd. He looked like the kind of kid who rewrites playground rules, breaks hearts and knows what detention looks like, yet he was eloquent and he was enthusiastic about my book. He said he had read it, he said he enjoyed it and I was dumbstruck.

When did boys stop reading? And why? I suspect there’s a shortage of YA books targeted at boys these days since I see tables in bookstores heaped with books about being popular, being unpopular, dating a vampire, being a vampire, not eating, eating too much, losing your BFF, losing your virginity, and the ever popular bulimic Vampire who moves to a new school and finds a BFF, but precious little about being a boy (with all due respect, I’m not including graphic novels here. I do consider these to be targeted at boys but they’re not the boy equivalent of the glossy YA novels you see in bookstores, so obviously aimed at girls). I’m not saying that books intended for boys don’t exist, but not since The Catcher In The Rye has a book inspired boys to read the way that girls do. Granted, Frank Portman enjoyed great success with King Dork, a book that actually riffs off of Catcher In The Rye (the publisher even uses it in the cover art). But if I might venture a guess, King Dork probably ended up being read by as many girls as it was boys.

Where is today’s The Catcher In The Rye? Has it been written? Have I overlooked it? Has it been dismissed in favor of video games?

Years ago, when I first waded into the world of YA literature I was inspired by Jack Gantos. The Joey Pigza series, about a freaky kid with a lot of problems, enchanted me and inspired me to read all of Gantos’ work, including his memoir Hole In My Life, a riveting account of the author’s decline into teen alcoholism and eventual imprisonment. I’m quite certain that this book didn’t get the attention it deserved simply because it wasn’t read by enough kids, namely boys.

I’m not a big conference goer but I’ve been to enough SCBWI conferences to know that if you take away the illustrators, you’re pretty much left with a room full of women. This is a curious thing to me. Are men simply not that interested in this genre? I’m not saying that women aren’t capable of writing male characters. S.E. Hinton is a great example. The Outsiders, written all the way back in 1967 is still a favorite of mine. I have noticed, however, that women tend toward writing female characters and female stories and publishers seem to tend toward publishing the same thing. Do I know that a publisher would leap on a well-written boy’s book if one presented itself to them? No, I absolutely do not but I would certainly hope so.

Is it the readers, the writers, or the publishers who have dropped the ball here?

I can’t remember the last time I saw a boy with his nose buried in a YA novel. I realize that boys are not reading this but if you’re near one, make sure and tell him a secret: Girls think boys who read are hot.
Posted by Andrew Smith at 4:36 AM