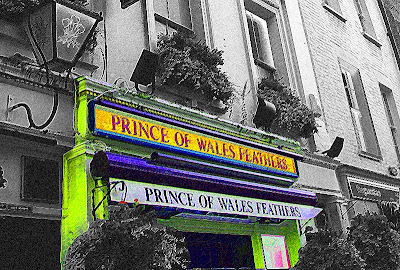 Don't go in there.

This picture is of a real place that pops up from time to time in my book The Marbury Lens. And this will, inevitably, become a very convoluted blog post, but if you look very closely, the address to the right has an advertisement for The Guardian.

What does that have to do with anything? Well, in today's Guardian, Robert McCrum writes about maintaining a gap between novelists and their readers... and what kinds of consequences manifest when authors pay perhaps too much attention to what their readers -- or the markets -- want and expect.

Interesting stuff, and well-suited for a writer who can get as pouty and self-destructive as I.

I've written how I hate the thought of my being "branded" -- and that the four books I have written/coming out are all as different from one another as butter is from golf balls. In a recent email exchange with my editor, I said that I never have, and never will, write to the market. That's why you won't find a dragon, vampire, nor a single wand (sorry, Nora) in any of my books -- not that there is anything definitively wrong with vampires, dragons or wands. I just don't do it.

And I like meeting readers and other authors when I attend Literary Festivals (as McCrum calls them) and such, but I also am wracked by intense feelings of I-should-be-sitting-in-the-corner-rocking-back-and-forth-catatonic-trance-dude-because-I'm-having-a-panic-attack-and-everything-I-say-is-meaningless-and-stupid kind of thing going on.

Now, be serious... anyone who's ever seen (and forgotten) me at one of these events invariably gets deeply creeped out by me.

I don't know. I have a broken foot. I'm in a foul mood. I just deleted my account on Goodreads and came this (holds up two fingers) close to deleting my Facebook as well.

I better get outside.

I mean, limp outside.

And mind the gap.
Posted by Andrew Smith at 6:45 AM