more observations(from the other side of the black hole) 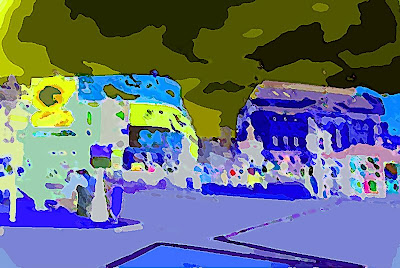 Okay. Well, I'm going to be blogging from Blogger XY's universe for the next couple days, at least... because he has a lot to say about the way we look at things, and the stupid stuff it's okay to get away with.

But one thing that Blogger XY has little tolerance for is the dumbing-down of our universe. Is anyone else noticing this? (I'd put multiple question marks there, but that looks totally wussy)

I'll let you in on a secret ritual that takes place every day at El Rancho de Drew. Every day, at 5 PM, if the Dodgers aren't playing, Drew sits down, cracks open a beer, and turns on Keith Olbermann. I mean the TV program. I don't think Keith actually gets aroused by reclining novelists with cans of beer in their hands.

But Keith does read this blog. And Keith, you know I love you, but jeez! Drew needs to set you straight on a couple minor issues.

Okay. So, yesterday, sitting down, beer in hand, Keith comes on and his lead story is the usual blah-blah-blah-Newt-Gingrich-blah-blah-blah-Republicans-are-falling-apart. Keith. Duh. Move on, man.

But that's not the really dumb part that grabs Drew by the ears and makes him stare in stupefied horror at the screen. So... I'm barely listening, and Keith has on this MSNBC-Newsweek guy (not the one who looks like a praying mantis, some other guy... I can't remember his name) to talk about Newt not being a citizen of the world (as though 6 billion freaking people are heartbroken over that one)... and this guy is sitting in front of a shelf of books.

They are Reader's Digest Condensed Books.

And all at once, these thoughts simultaneously fire through Drew's head:

1. Are you fucking kidding me?
2. Do they still make Reader's Digest Condensed Books?
3. Dumbest. Background bookshelf. Ever.

My mother used to read RDCBs when I was a little kid. Know why? Because she couldn't speak English! She taught herself English by reading and singing along with my brother's Beatles records. Seriously.

A few days earlier, when Keith interviewed Howard Dean, Dean was in front of a wallpaper background of fake books (rather Zen-like, if you ask me), like he was sitting in some vast law library or something.

I guess the wallpaper of fake books is just one rung down from RDCBs on the evolutionary ladder of literacy.

I don't know. Things like that bother me. But maybe if you'd start talking about something fresh and new, Drew wouldn't pay so much attention to the dumb stuff in the background.

I'm just telling you this because I love you, Keith.

You know my number, dude.

Call me, and I'll give you some new copy.
Posted by Andrew Smith at 6:26 AM