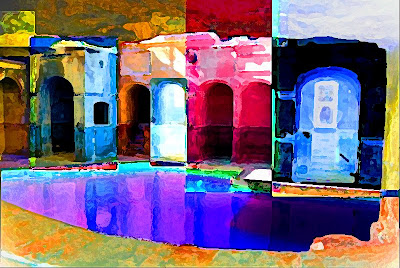 Did you use a Sharpie when you signed those boys' foreheads, Michael? [see yesterday's comment]

Michael Grant's comment touches on so many of the ideas behind this whole thing I see. First of all, you have to recognize that innate boyness of having someone who's giant and scary sign parts of your body. I'm going to guess there weren't too many girls waiting in line to get inked on their hides. So, there is a connection that can be made, and these guys are looking for it... but there's just not a lot of opportunities for them to find it.

Looking at this through a kind of macroeconomic lens, I think we can draw a couple of fair relationships about why we've been losing boys (in fact, harming them, in terms of their literacy abilities), and, simultaneously, why it is we see fewer and fewer boy-oriented titles and authors.

The 1970s and 80s saw some incredible transformations in the ways American industries looked at things. In the business sector, marketing analysis elevated to a fairly accurate predictive science, as opposed to the hit-and-miss door-to-door approach of the 50s and 60s. Concurrently, educational data collection and testing also began to make some pretty alarming revelations, particularly regarding the gender gap in achievements between girls and boys (with boys outpacing the girls in every assessable category).

We know (and I have written about this a number of times) that educational data shows that girls have made positive strides in achievement in the last 30 years, but boys' scores (particularly in reading and writing) have actually declined. We are damaging boys in schools. Not maintaining their ability status in general, actually harming them.

In other words, since the 1970s in America, boys are a declining industry. Resources (both in the market and in educational institutions) have shifted away from one gender and toward another.

I'd like to believe that Michael's first line -- that if you write it, they will come -- is true. That's exactly why those boys were lining up to be gouged by his Sharpie pen.

We need to get to writing those things the boys are looking for, before our school system completes their transformation into absolute, complete, illiterate failures.
Posted by Andrew Smith at 4:46 AM