the sound of falling objects 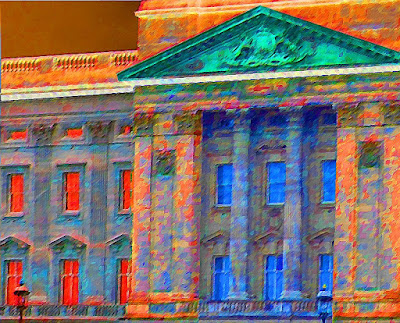 So yesterday morning, bright and early, my son and I headed down the mountain to Los Angeles to sit in on day one of the production of the audio version of in the path of falling objects. My son wanted to come along to see what the studio and process were like, and I was happy to spend the day with him.

The Random House/Listening Library facility is really nice, and all the people who work there... well, let's just say they obviously enjoy their jobs. And how could you not, if you worked in a place like that? Dan Musselman, who runs the place, gave me and Trevin the grand tour of the facility. Trevin liked the studios and tech stuff. I liked the library -- a warehouse room with bookshelves that were probably about 15 feet (or more) tall, and stuffed with books.

I realized last go-around, when they did the audio for Ghost Medicine, that it's usually a good idea for producers to have access to authors, just to be certain how particular words should be pronounced. And I knew that the only issues that would come up for in the path of falling objects were going to be place names: locations in New Mexico and Arizona, and a couple spots in Vietnam (where some of the novel takes place).

So we got all that technical stuff sorted out, and Trevin got to meet our producer, Jessica Kaye, and actor Mike Chamberlain, the same team who made the audio for Ghost Medicine, and we settled down into the studio and watched them do their thing.

The first time I'd gone through this was a strange experience, because when I wrote Ghost Medicine, I never once thought about the possibility of audio format. So, it honestly made me feel kind of uncomfortable hearing it read aloud. And the book was so personally connected to me, too... maybe that's why I still can't bring myself to listen to it. But while they were recording Ghost Medicine, I happened to be writing in the path of falling objects, so I kept thinking to myself: what would this sound like as an audio? And I tried to write it with the intent that it be read aloud.

[Side Note: A lot of writers think that you must read your stuff aloud to be able to tell whether or not it's any good. Nonsense. Words on a page are words on a page. They are presented in that medium for a reason. Just my opinion.]

The strange thing is, though, that in the path of falling objects has even a stronger personal connection to my life, and I really loved hearing it as Mike read it aloud. He did an incredible job... which is probably why my son and I stayed there nearly the entire day. We didn't want to stop listening to it (especially because Mike was getting into the really tense parts just at the end of the day). Producer Jessica told me she had wondered how Mike would pull off the psycho Mitch parts of the book, and after his first couple descents into Mitch's voice and perspective, we all agreed:

If I lived nearer to the studio, I'd probably sit in there every day for the recording. It really is that good. And I definitely will listen to the thing when I get my copies from Random House.

One more thing... I don't think I could ever be a voice for an audio book. That is one heck of a tough job.
Posted by Andrew Smith at 6:17 AM