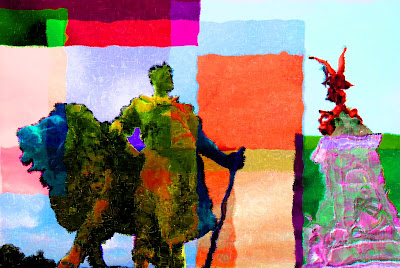 Blogger XY has stepped aside for today, so I've got a few random observations to throw out.

Second, once again, Drew noticed a background bookshelf behind last night's Keith Olbermann guest number one -- some attorney guy. It was an interesting BBS (Background Book Shelf), because it consisted of a fake wallpaper of title-less leatherbound library volumes that were partially concealed behind a fake paper shoji. I guess they couldn't come up with anything that made their guest look smarter than the guy with the dictionary and Clive Cussler novel from two days ago.

Attention, Keith: I can loan you some books, bud.

And, third: A friend of mine from the Kansas City SCBWI sent me an email in which she asked about whether or not I outline when I write a book. Coincidentally enough, Cynthia Chapman Willis also blogged about outlining yesterday. My answer, succinctly, is No. Well, sort of.

Here's what I said:

Outlines: No. But, I do email myself a lot. Seriously, most of my last novel was written by email... so, when I was away from my office, I would reply to myself, including the message, make changes, reply again, come home, paste into the document, and do it all over again. Yeah... probably 90% of it was done by email. This allowed me to write all day, no matter where I was. Sometimes, even by iPhone. I'd also send an email back-and-forth about "What still needs to happen;" and I'd just make a numbered list, usually with one-word points about all the loose ends that needed to be tied up, and I'd check them off or delete them as I went along.

But an actual outline? No way. The story has to write itself. I literally did not know how it was going to end until I got to that final paragraph.

But I built a barn entirely by myself (even the roof) with just a plan in my head. It's still standing after 10 years, believe it or not.
Posted by Andrew Smith at 7:59 AM