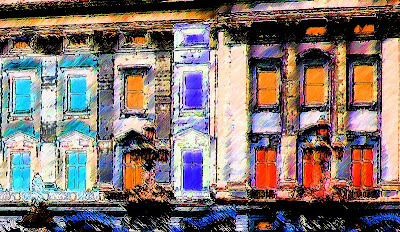 There are a few other authors that I do very much enjoy sharing ideas and communicating with. And I will note the distinction between "writer" and "author," thanks to a previous comment from James Preller on this blog, where James said:

...I make the distinction between "writer" and "author," which in my mind has to do with publishing, and money, and most of all, permission.

It's easy to be a writer. Just write. It's the one step in the process that you completely control. Yet it is stunning how many people who purportedly want to be "authors," who want that "lifestyle" or reward or validation, are unwilling to BE writers in the first place.

So, the other day, I'd exchanged a few emails with an author friend who has been letting me read some of his WIP (that's writerspeak for Work In Progress)... and -- let me tell you -- I really like what I'm reading. That's beside the point, though. I got the idea, because of the way he described what was going to happen in the book that he was an "outliner," so I asked him about it.

I paraphrased a quote from E. L. Doctorow to him in my email, but I found the actual quote, and here it is. Doctorow said:

Writing a novel is like driving a car at night. You can only see as far as your headlights, but you can make the whole trip that way.

I like that idea, and I think Doctorow describes fairly accurately my approach to writing. That is to say, I know that there are going to be certain "turning points" in the journey -- and I usually will list these turns on some kind of note, pad of paper, or email to myself (so if you want to call that an outline, go ahead) -- but the direction my characters go off in is really up to them.

So, just as in every novel I've written, I knew exactly where I would drop my main characters off in the final scenes of in the path of falling objects or The Marbury Lens, but what they did in those final scenes was pretty much entirely up to them.

And their decisions made sense, too, based on the road they'd followed to get to that final destination.
Posted by Andrew Smith at 6:27 AM