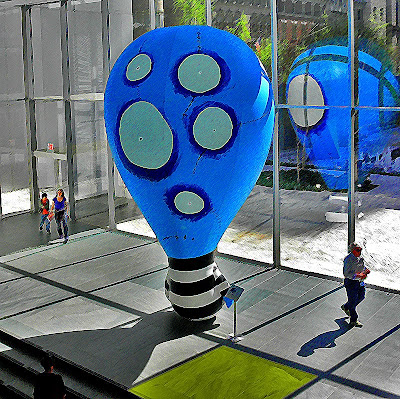 Last year, when I was speaking in San Francisco, I met a fellow author of Young Adult fiction, who told me that he liked to work on multiple projects -- three or more -- all at the same time.

And I was, like, Are you insane? How can you possibly do that?

He assured me that working on multiple projects simultaneously was the only way to go -- that he'd never have it any other way.

I mention this because I currently find myself well into writing two completely different things (and by "well into," I mean, like 100 pages) at the same time. As I suspected, it's making me insane, and I'm beginning to feel like writing two things at once -- combined -- is going to take more time overall than writing one thing first, and a second thing... um... second.

So I'm finding myself, in the mornings, opening up two files and skipping back and forth. Oh, and these two things couldn't possibly be more unlike one another if I tried. So it kind of feels like skipping back and forth between worlds, kind of like a certain character I know in a book that's coming out in November.

And it's making me crazy, so I am trying to decide which world to ignore for a while.

Now, since I am rambling, and it's Mother's Day, which means nobody is going to be sitting at home reading rambling blog posts, I have a couple random thoughts about writing YA.

A while ago I was talking to another writer and I mentioned that I wrote Young Adult fiction. Then the other writer asked me, Oh, what kind of YA? Vampires or Fantasy?

My answer was that I write the kind of YA where girls get even with boys for being shallow and dumb.

Second random YA thought: It has to do with yesterday's post and comments, and these generalized boxes we often pack YA into. I was reading a review (I'm carefully going to avoid being too specific regarding titles, etc.) about a recent YA novel that is getting some good press about girls who try to get even with boys for dumping them (kind of like Fatal Attraction but without the psycho element). The reviewer lavished heaps of appreciation for books that portray teen girls as taking charge and being in control. Well... come on now, there aren't too many YA books that paint a contrary picture, are there? And, just for the fun of it, why don't we start listing all the YA titles that portray boys as being dumb, worthy of punishment for dumping or ignoring girls who think their futures are all clearly planned out at the age of seventeen, or boys who are just the mindless objects of girls' summertime obsessions?
Posted by Andrew Smith at 6:11 AM