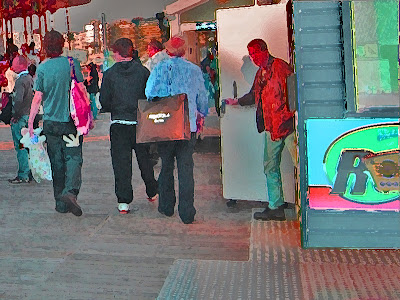 It is a rare Sunday when I actually have planned to write something on the blog. Well, come to think of it, it's a rare anyday, since I usually just start typing random stuff at 3 a.m. or so.

But I'm not going to write about what I'd planned, because I noticed a kind of trend that has been popping up on other blogs that I follow, so I wanted to chime in here -- which, I suppose, is kind of like copying from your seatmate's exam. But you know what they say: all -- naturally, with the exception of excessive use of exclamation points -- is excusable in blogging.

The topic of the week seems to be about characters. On Lia Keyes's blog, she asked, "How do you make your readers care about your protagonist's plight?" (Okay. Lia can get away with using the word "plight." She's English).

And over on Tabitha Olson's blog, she provides some very comprehensive profile sheets for creating major and minor characters.

Well, there are conceivably limitless different approaches to writing, and both of these posts (Tabitha's is more nuts-and-bolts, and Lia's -- you'll want to look through the comments -- is perhaps more organic. And British.) can be very helpful depending on your own needs as a writer, so they're worth checking out.

In my case, I neither worry about making my readers care about my protagonist's perils (ha... that's a way more Englishy word than "plight," and there's something about the rebel in me that bristles at the thought of "making" people feel certain ways) nor do I fill out comprehensive profiles on the people in my books.

You know why? Because, besides being the spitting image of Gertrude Stein, I am insane. I'm pretty sure I have MPD -- Multiple Personality Disorder. Just ask anyone who's spent more than two hours in my company and they'll confirm my diagnosis. My moods don't swing, they ricochet.

I don't make stuff up about my characters because all of my characters are me. And the few who aren't actually me are real people with whom I have interacted or observed closely over the course of my life.

I suppose that when I run out of mes (That's the plural of "me." Duh. One of my personalities likes to break things when people use apostrophes to pluralize.) that I will stop writing, but I have a feeling that's not going to happen before I get out 20 or 30 more books.

I have only begun to dip small spoonfulls from that dark and polluted well.
Posted by Andrew Smith at 7:25 AM