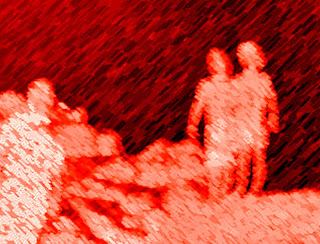 So about this name thing. I'll be honest. About a week ago, someone who'd read The Marbury Lens asked me where I got the name "Marbury." And I just kind of brushed him off and said I don't know.

So here's the truth. When I wrote The Marbury Lens, I was just planning on writing a kind of psychological/mystery/suspense thing about what happens to Jack in California. But, during the writing, I had a kind of intense dream about this other place called Marbury -- the place in the book -- and it was just like it was in the book. And, when I was dreaming it I knew I was going to write a story about it (I keep a pad of paper and a pen beside my bed and I wrote a few things down after I forced myself out of the dream). And this may make you wonder, but I really don't know why the place in my dream was called Marbury.

Character names are different. Some character names just kind of come to me. A lot of times, I will start writing a novel and then change the main character's name after I am well into writing the story. This is one reason why I couldn't imagine writing without a computer. Some of the names in The Marbury Lens changed multiple times before I was satisfied.

Sometimes, I research names. Since Nickie and Rachel (characters in the book) were from England, I looked up websites from schools in England, just so I could find common girls' names that sounded good to me. But Nickie is Swedish (she's named after a real person I knew when I was a teen) -- short for Annika (which I never revealed in the book).

A lot of the names of characters I write about are actually taken from people I know, too. Sometimes I tell the people that I've named characters after them. After all, they're only names. I never write about people I know. Well, at least it's not obvious when I do. All told, in The Marbury Lens, there are about half a dozen characters who are named after people I've known.

And sometimes I use names for characters that happen to be the same name of someone that I actually know, but there was no way I intentionally named the character after that person -- if that makes any sense. Some names, after all, are just names, and after writing the number of novels and stories I have, you kind of start running out of names unless you want to get all hippie-ish. But, if you ask me, would I ever consider reading a book where the main character is named Moonshadow, the answer would have to be: