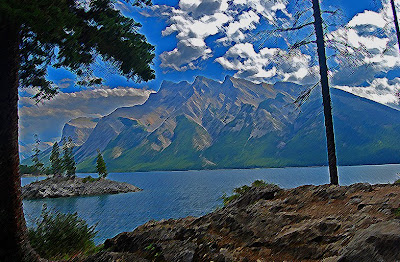 So my eye -- I mentioned this on another blog somewhere -- is totally messed up. I have this nasty infection which has forced me to stop wearing my beloved contact lenses and resort to a poorly-suited eyeglass prescription that makes me feel like I'm stoned.

And to make things worse, my eye -- half shut and unable to focus -- makes me look like Charles Laughton on a bad day. So, I broke down and went to the doctor.

People who know me are aware that it takes a minimum of an unhealed broken bone to get me to the doctor, so you can imagine, I think, the eye.

So, here's what happened:

Of course, the first thing, after the forms and such, is they bring you to the "pre-doctor" room, where they check your blood pressure, temperature, weight, and make you feel like a total wuss for coming to the doctor.

Well, first of all, let me say that I was in a really foul mood anyway, and just barely managed to convince myself that coming to the doctor would NOT be worse than just shooting myself in the fucking face. So, I'm like, "Why do you need me to pee in your cup when there's something wrong with my eye? It's piss. Is the doctor going to do a tarot spread, too?"

Well, pre-doc was not amused, and I half-expected her to go into the minstrel pee-bone's-connected-to-the-eye-bone routine, but, obviously, she thought better of it and left her lonely cup empty, saying, "The doctor will be in in a few minutes."

Now, I have my theory about health companies and pee samples, but that's for another post. I did notice that pre-doc had pulled up my Facebook profile, though.

Anyway, the doctor comes in about half an hour later. He looks at me quickly, then flips over my patient paperwork and starts drawing a picture. I shit you not. A picture. This is what he says:

DOC: This is your eye.

ME: Why are you drawing those lines across it? It looks like a giant clam.

DOC: No. It's an eye. Giant clams look more like this.

[Now he begins drawing a giant clam, below my eye.]

ME: Is the clam what hurt my eye?

[He looks at me. I can clearly tell he's thinking "retard," but, Christ, I'm not the one drawing a not-actual-size eyeball and giant clam on the back of a patient chart.]

PRE-DOC: Are you drawing lace fans?

DOC: That's not a fan. It's a giant clam, and this is Mr. Smith's eyeball.

PRE-DOC: Well I can clearly tell that's an eyeball, but giant clams don't look like that.

So, after about 20 minutes of art class, the doctor, who has to this point done absolutely NOTHING for my eye, looks at me and says that there's a prescription of antibiotic pills and eye drops waiting for me at the pharmacy.

And I'll be honest -- I've only taken antibiotics one time in my entire life, and I think Doc Picasso accidentally gave me the kind called "uppers," because I've been awake since Monday.

Health care.
Posted by Andrew Smith at 3:33 AM