Last night, I think everyone in the city must have been walking around with pints of Guinness in their hands. It was quite a remarkable night.

Everyone here is currently sleeping off their jetlag, and our trip was not without its problems.

In Heathrow, somebody else picked up the daughter's suitcase and left with it, leaving the daughter with nothing but the clothes on her back. The people at the airline were very sympathetic, but we also had a plane to Dublin to catch (at another terminal... and Heathrow is bigger than some entire cities).

Almost impossibly, we ran into the suitcase while finding our way to the connection.

So we stole it back.

The son got frisked getting onto the plane for Dublin. Why? Because he was carrying a 6-inch pair of (very sharp I might add) scissors in his backpack. They had been there ever since school... ever since we left Los Angeles.

We debated whether or not to just leave him in jail. Heck, it was Guinness Day in Dublin and the pints were free.

Now, this morning, I realize I've left my camera's USB cable at home, so I can't put up any pictures from the old Nikon until I get back to the States. I do, however, have an iPhone, with which I took a picture of this amazing urinal last night at some place where we were drinking beer that was very dark and had a pudding-like skin on top. 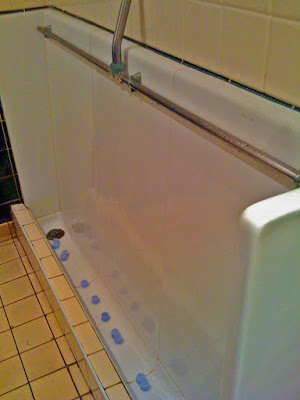 Oh yeah. That is the god of urinals.

An army could piss into that all at once.

And why, you might ask, were there no supplicants at the porcelain altar? Duh... because I was taking a picture of it.
Posted by Andrew Smith at 11:37 PM