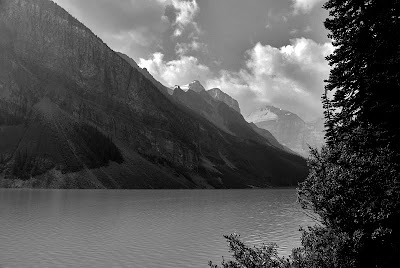 Well, for all kinds of reasons last week I was exceedingly disappointed in myself. And I rarely look forward to Mondays, but I think I can give this one a go.

I've written before how that usually when I finish writing a book, I'll wait a few months at least before starting something new. But I didn't let that normal down-time happen after writing The Marbury Lens. And I've been having a hell of a difficult time, too, because I've written the first chapters of what I'm currently "making up" over and over so many times.

I tried playing around with the narrator's voice, the POV (making it from an entirely different perspective), and I actually started the story at three completely different places of departure. But, finally, I got settled with one starting point in particular and now it's all working out fine.

Again, the whole multiple-drafts issue is kind of pointless when you write on a computer, because all those other starting points are still parts in the book -- they just get spliced in deeper into the narrative.

So for now, Monday morning writing time at about 3:00 AM, things finally seem to be working out.

Nine more days.
Posted by Andrew Smith at 3:38 AM