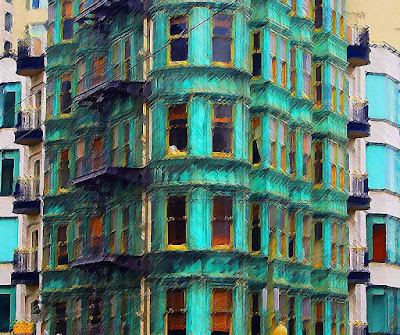 So, yesterday's post about audience made me think about another phenomenon that is increasingly evident in writing... and it's something that I kind of worry about.

I've read an awful lot of (awful) blogs from book "reviewer/fans" (who want to become published authors themselves) where they insist that authors staying in touch with readers via social networking sites like Facebook or Twitter allows for a greater connection and responsibility between authors and their audience.

I worry about this for a couple of reasons. First off, though, let me say that I think it is a very good thing for authors to acknowledge their readers; and I certainly always make it a practice to answer all reader letters and emails. That's one thing... but an emerging idea underlying some of the recent blogs I've read is that the interaction of audience and author will begin to collaboratively determine the flavor of the finished product. That's something to be scared of, at least as far as I'm concerned, and I guess that's why I think of an audience of one when I write.

Brian James said it very well when he commented on yesterday's post: My philosophy for writing and being a writer is this: "This is what appeals to me, I hope it appeals to you too."

...And beyond that, leave me alone with my own ideas about what should be written.

Again, I think that the excessive entanglement of artist, audience, and market is largely responsible for the Vesuvius of CRAP fountaining down on our literary world. Enough with the vampires, already... the stories about girls who fall in love with handsome, sexy, and unattainable studs who also happen to be some manifestation of 50s-era movie monsters. Jeez! Writers -- for the love of God, you could come up with something new, fresh, and innovative if once in a while you'd get off your asses and actually touch, and maybe fall down in, the real world.

Just my two Canadian cents.
Posted by Andrew Smith at 2:30 AM