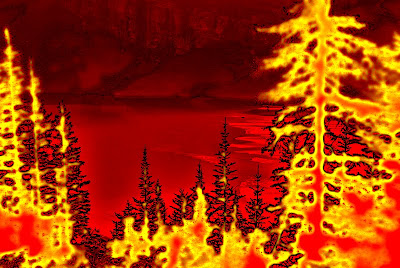 One of the things I like to do when I'm reading a book that I enjoy is to keep going back to the very first words on the opening page. Re-reading them, listening to their cadence and tone like they're the opening movement of a piece of music. Like the first track on an album.

So I'm going to share some here. I'm not saying these are necessarily the most awesome, incredible, books ever written (but they may be). I just like the sound and taste of these words. So, here's a list of a few books I've read and enjoyed (or written), and their opening few words...

A throng of bearded men, in sad-colored garments and gray, steeple-crowned hats, intermixed with women, some wearing hoods, and others bareheaded, was assembled in front of a wooden edifice, the door of which was heavily timbered with oak, and studded with iron spikes.
--From Nathaniel Hawthorne's The Scarlet Letter.
This is the tale of a meeting of two lonesome, skinny, fairly old white men on a planet which was dying fast.
--From Kurt Vonnegut Jr.'s Breakfast of Champions.
This one is particularly delicious:

Dear friend now in the dusty clockless hours of the town when the streets lie black and steaming in the wake of the watertrucks and now when the drunk and the homeless have washed up in the lee of walls in alleys or abandoned lots and cats go forth highshouldered and lean in the grim perimeters about, now in these sootblacked brick or cobbled corridors where lightwire shadows make a gothic harp of cellar doors no soul shall walk save you.
--From Cormac McCarthy's Suttree.
People wouldn't take what Martin Pemberton said as literal truth, he was much too melodramatic or too tormented to speak plainly.
--From E.L. Doctorow's The Waterworks.
And, finally, some from people I know:

Sundi Knutt had a blue-ribbon-winning sow, a deer hunting license, and a mound of cleavage.
--From Jill S. Alexander's The Sweetheart of Prosper County.
One minute the teacher was talking about the Civil War. And the next minute he was gone.
--From Michael Grant's Gone.
I sense him in my midst. The air seems to thin when he's near me.
--From Yvonne Prinz's The Vinyl Princess.
With two from the blogmaster:

I guess in the old days, in other places, boys like me usually ended up twisting and kicking in the empty air beneath gallows.
--From The Marbury Lens.
And, a mere twelve days from birth:

The only shade there is blackens a rectangle in the dirt beneath the overhang of the seller's open stall.
--From in the path of falling objects.
I just love first words from an enjoyable read.
Posted by Andrew Smith at 7:03 AM