more observations from the guy in the corner 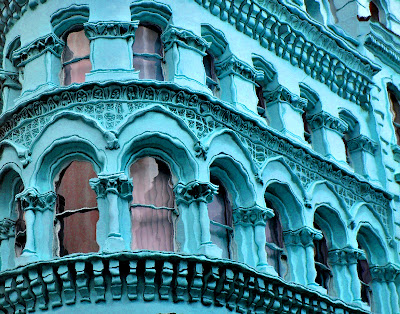 Last night, I was lucky enough to take my daughter to her first-ever rock concert, and it was a blast: great venue, the crowd was pure adrenaline, and the band (one of those we-broke-up-but-now-we're-back-together-for-the-first-time shows) played a terrific set.

When we got out of the show, it was very late and we were hungry, so we decided to stop at one of these 24-hour diners (that I haven't been to, I think, since my daughter was born). And I realized how amazing it is for writers to go to low-budget places that serve sit-down meals after midnight because it's kind of like sitting in a multi-screen 3D theater and being able to watch all these amazing performances going on around you.

First, there was the lady with a styrofoam coffee cup holding onto the door when we walked in.

When the waitress came to our table, as usual, she asked if we'd like something to drink.

ME: Do you serve beer?

WAITRESS: Not any more. It caused too many problems.

WAITRESS: (Opening the menu and pointing) But we serve all your favorite beverages.

[Side note: I kid you not. She actually said that. All my favorite beverages.]

ME: My favorite beverages are beer and whiskey.

Then there was the really drunk guy in the booth directly behind my daughter. There was a lady sitting right beside him and he kept saying things like, "I bet you're afraid of me because I'm in court-ordered anger management, aren't you?"

And, "Why do you cry so much? You cry every fifteen minutes. How do you think that makes me feel? I'd like to cry, but I can't."

Then he started talking about the film Dr. Strangelove. I am not making this up. In a moment of brilliance, drunk anger management guy said, "I thought every scene in the movie was great, but when you put them all together, it didn't make any sense."

It was a great night to be alive.
Posted by Andrew Smith at 9:47 AM