a good day for 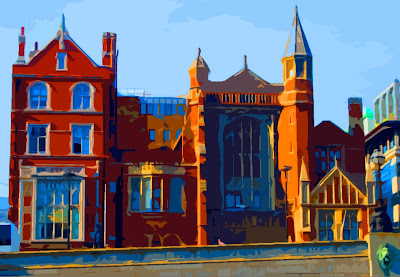 Yesterday, I drove out to Mrs. Nelson's Book Shop to lurk in the shadows and watch all these amazing kids receive awards for their submissions to the 2010 Young Writers Contest.

It was quite an uplifting experience, because I could tell how excited these kids -- who ranged in age from 5 to 18 -- were about writing and what they had been able to do. And there were tons of parents and family members there, too, which speaks well to the quiet acceptance of having kids who are actually artistically inclined.

The horror. Where's math and science in all this? Aren't you people afraid... of China or something?

And Mrs. Nelson's did something (well, lots of things) really cool, too: They published and bound the winning submissions in a hardcover book that was given to the winning kids.

The quality that I noticed most in the kids' writing was voice. This is something that adult writers need to pay closer attention to, because it can't be something contrived, generic, or false. Readers can see through that right away and you simply will not be able to "sell" your story to them (and I don't mean cha-ching sell). Voice is the ineffable bridge that connects the reader to the author: you either have it or you don't.

Sometimes, I imagine, readers will hang in there with a story that has a weak voice just because the plot elements are exciting. I've seen -- and read -- more than a few books that have recently been released that have that weak voice/interesting complications mix, and they are not very satisfying to me. Usually, I won't finish a book that suffers from this imbalance. Sometimes I do, but it is so unsatisfying. And I really wish I could name names, just so you would say oh yeah... you're right, but I am a devout believer in literary karma.

Anyway, back to the kids. Two of the boys I coached this year were recognized at the awards ceremony, and I really liked their stories. A lot. In fact, I'd kind of like to beat them both up for being so much better at writing with voice than I was at their age, and I knew I wanted to be a writer then, too, but these guys are, like, I don't know what I want to do... and I want to shake them and say TELL ME YOU'RE GOING TO BE A WRITER WHEN YOU GROW UP.

Okay. Well, Paul wrote a story about guilt and bravery called The Wild Boys, about going to an oppressive all-boys school with his brother in Nigeria; and Corey wrote a story about religious confusion called The Prophet, about a freaky subway ride with a stranger. And I'll be honest: when I read their first drafts, way back in February, I knew they were going to do something.

Nice work, guys.
Posted by Andrew Smith at 5:54 AM