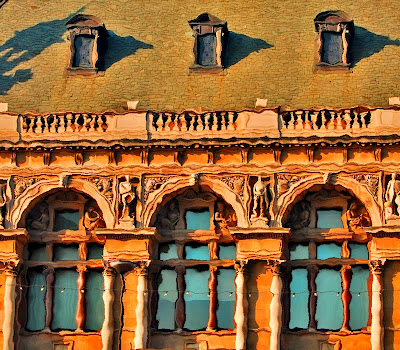 I travel a lot.

Usually, because of where I live, I fly out of and into LAX (Los Angeles International Airport). Sometimes, I'll fly out of Burbank, but there's something that creeps me out about that airport. I don't know what it is.

Not that LAX isn't easily among the worst airports in the country. Still, in the next month, I'll be flying back to the East Coast, and then back to LAX; and after that, flying out of the country -- all through LAX.

I love traveling, too.

But as much time as I spend away, there is something that always happens whenever the plane begins descending over the endless flattened blob of Los Angeles: things feel back to normal.

I mention this because this morning, feeling a bit nostalgic, I posted this great music video from the Decemberists on my Facebook page:

It's a great song, from an amazing band, but I also think it's kind of meta-shallow to fall back on the cliches about Los Angeles. At least Angelenos tend to be good sports about the stereotypical generalizations about the city (or maybe they don't get it). Still, it's easy enough to make blanket-generalizations about just about any city -- and end up in a brawl, in most cases, too.

Call me crazy, but I love Los Angeles.

Just not the airport.
Posted by Andrew Smith at 9:03 AM