the day i quit 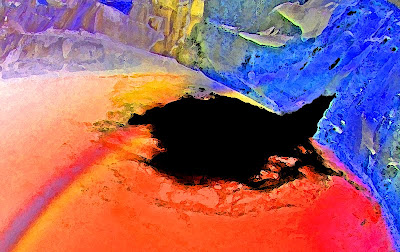 This fall, I actually have three books coming out. Two of them are paperback versions of my first two books (cover art coming soon): Ghost Medicine and In the Path of Falling Objects; and the third is my newest and destined to make some people squirm uncomfortably The Marbury Lens.

So, of course, this is all very exciting for me, and the people at Square Fish (who are doing the paperbacks) plan on putting some author questions and answers and excerpts from my books in the back pages of the new editions. So they sent me this formidable list of questions, and I decided to share a few of them here today, as a kind of preview for what's coming up (and they're good questions, besides):

As a young person, who did you look up to most?

When I was a kid, I looked up to my brother, Patrick, the most. He was older, and we shared a bedroom (there were four boys in my family) until he enlisted in the Army -- when he went off to fight in Vietnam. Patrick drove a 1959 Cadillac – a gift from our aunt – and he used to drive the three of us younger boys around with him and his tough-guy high-school friends on their crazy adventures, and we listened to AM radio stations and daringly used words like bitchin’ when we talked.

Well, to some extent, all my protagonists are part me, but if you had to isolate one individual character, I think there’d be no doubt about it: I am most like Simon Vickers, from In the Path of Falling Objects. He always takes risks without seriously considering the consequences, and I think he has an attitude – maybe due to naivete – that nothing bad will ever happen to him. He likes to push buttons and then acts indignant when the people around him get pissed off. Yeah… that’s me.

When you finish a book, who reads it first?

When I finish a book, I read it first. That’s when I try to read it like I didn’t have anything to do with it’s having been written. I am not a writer who shares what I write with friends and family, though. So, when I finish a book, I usually send it directly to my agent, Laura Rennert, and my editor, Liz Szabla. Then, immediately after that I get sick and start asking, Why did I send that to them? Why? Why? Why? And I start calling myself every version of stupid I can think up. Then I get really grumpy until I hear back from them – an interminable and agonizing wait, even if it’s only a few days long.

Who is your favorite fictional character?

“My” favorite fictional character is, naturally, one of my own – a kid named Stark McClellan. You haven’t met him yet, because he’s in a book I wrote, called Stick, that is not yet published. But the reason that I like him so much is that he has this really dry (but definitely not cynical or sarcastic) sense of humor in the way he looks at things; and he has this remarkable ability, I think, to see a kind of wonder in everything – even if he’s surrounded by cruelty and ugliness. I admire people who are like that.

Coming very soon: Cover art and a Teacher/Librarian/Student Discussion Guide for The Marbury Lens.
Posted by Andrew Smith at 7:27 AM