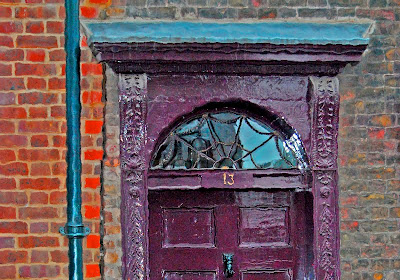 I have my finger on the pulse of the publishing biz.

After hobnobbing with the top movers and shakers in literature over the weekend, here is what I found out about the YA world:

1. Brace yourself. Everyone is saying how the hot new trend in characters is going to be living people. I know. That's just too crazy.

2. The "next big monster" is going to be a human being. Sounds like someone's been smoking something.

3. Rich Deas, the artist, really knows his music. We had a great discussion about all the new bands coming from New York. Honestly, Brian James, on his Weekend Music Roundups, gives us access to bands we've never heard or maybe hadn't thought about for a long time, but I have to totally agree with Rich that some of the best stuff going in new music seems to be originating from the Empire State region.

4. The bartender at Elephant & Castle introduced me to Dogfish Head IPA, one of the better IPAs I've tasted, but the really cool part about that is the brewery, in Milton, Delaware (a state that I'm still not entirely certain actually exists), has adopted the Steampunk Tree House and will house the sculpture there, making an expedition of discovery to the fabled land that may or may not exist called "Delaware" a trip worth taking.

5. Yesterday, at ALA, John Green did not wear green. Holly Black, on the other hand, did wear black.
Posted by Andrew Smith at 4:46 AM