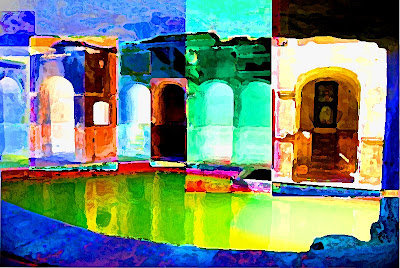 Today has been a one of those nonstop busy days from 8:00 in the morning to 4:00 in the afternoon.

We started in the morning with the YA Author Coffee Klatch, which, this year, had some really incredible authors in attendance. I'm sure if you're friends with any of the authors on Facebook, their tagged photos will come up (people took hundreds of them), and you may see me standing next to John Green and David Levithan, although I will probably forever be remembered as the colossal disappointment who came in between Holly Black and Laurie Halse Anderson.

Anyway, it was a lot of fun. After the morning event, I went by the Macmillan Aisle and got Deborah Heiligman to sign a copy of her book, Charles and Emma, for my daughter, and Lane Smith (no relation) to sign his kickass It's a Book for me, while the Feiwel folk were sticking these QR scans on copies of my forthcoming The Marbury Lens that will hook your cell phones directly into THIS video (turn your sound up):

Then, I was rushed upstairs to "Bookmobile Sunday," where I sat in on a very moving keynote address W. Ralph Eubanks, about books and growing up in an interracial family in the South during the Civil Rights Era (and he signed his book, The House at the End of the Road for me, too... and we had an incredible chat with my editor, Liz Szabla). Then, I spoke at the event -- for about 20 minutes -- on boys and literacy -- you know, stuff I write about all the time on this blog -- and the attendees were really intensely interested in the things I've been talking about, which was really gratifying.

After signing stacks of books at the Bookmobile event, I went back downstairs to the Macmillan Aisle, where I was scheduled to sign ARCs of The Marbury Lens... and there was a line of people waiting. Not just a line. A huge line.

That's when Barry Lyga showed up to taunt me with his iPad and his insane productivity. And David Levithan also showed up at the booth while my line was raging, which I just need to mention because he is such a freaking talented writer... and then, author PJ Hoover showed up and she even took a picture with me which may or may not one day show up here on this blog.